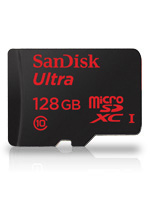 SanDisk has raised the bar with flash-memory storage by releasing the ultra-small 128Gb microSD card at the Mobile World Congress 2014 in Barcelona, Spain. This is seen as providing increased removable secondary-storage for Android or Windows phones and tablets due to its small footprint and is something I would see as important if we carry high-grade music and video files or complicated games on these devices and value the ability to “swap them out” as we see fit. 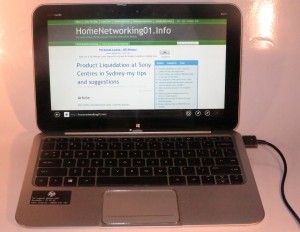 But I also see this as being suitable for more than the smartphone or tablet. This capacity is very much equivalent to what is available as a baseline all-SSD storage capacity for Ultrabooks and similar low-profile ultraportable notebook computers which typically run a full Windows deployment. Here, I could see this capacity appeal for smaller Wi-Fi portable NAS devices or it could be an encouragement to increase storage capacity in most dedicated-function devices like printers due to its small size and high capacity. This factor will be underscored for anyone who is working towards an extremely-low-profile design for a device rich in functionality such as the idea of a desktop multifunction printer having the same level of document control as a freestanding enterprise-grade multifunction printer.

It also shows that the storage density for flash-based storage applications is increasing which could be a benefit for both fixed and removeable solid-state storage applications. For example, an Ultrabook or tablet could be ending up with 512Gb storage capacity furnished by flash memory rather than the mechanical hard disk as a product option. Or the low-profile Wi-Fi portable “media server” NAS that you take with you could carry your media library with you and serve it to your tablet, Ultrabook or car stereo from a 512Gb solid-state storage.

I would expect a lot more for high-capacity ultra-quick solid-state storage to become the norm for “there-and-then” data storage applications.

What is happening to the common household telephone nowadays?