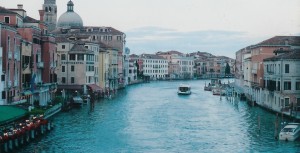 Venice – a city that could be legitimising the online vote

As you think of wafting down those canals in Venice in a gondola, or listen to that piece of classical music by Vivaldi who was born in Venice , you don’t know that this area has just been a turning point for a change that could affect how you vote.

This neighbourhood became fed up with the way the Italian state was taxing them but not putting much back in to that area. The sentiment whipped up some interest in the secessionist movement and, due to an increase in the IT industry in that area, the idea came across to run a referendum for secession using the Web.

This required that each person registered to vote receive a unique identity number for that election where they logged in to a Web page using that number to cast their vote online with a computer, tablet or smartphone. There was also the ability to use a regular telephone to cast your vote for the referendum. There were measures in place to detect and prevent voter fraud using this system and it would also have used the SSL technology to assure a secret vote on the Web front.

Of course, the mainstream Italian media, most of whom was controlled by Silvio Berlusconi, called the vote a farce but this was able to be seen in Italy and other areas as a mature proving ground for the Internet-driven e-voting concept. Other areas like Switzerland have implemented e-voting for various referenda and Norway has eyed this technology as something to implement in their municipal elections.

Some countries may still cast doubt over the idea of electronic voting technologies, usually due to breaking perceived “comfort zones” or fear of an increased risk of electoral fraud. Even postal voting in Australia has been considered acceptable only as an “away-from-home” voting option or on a municipal level by all but a minority of councils.

What would be considered important for any online voting system would be to have a unique number for each registered voter relating to a particular election or referendum, not correlating to other “primary-key” numbers used as part of public service or commerce like tax numbers, social-security or public-health (NHS / Medicare) numbers. As well, this number is provided to each voter by regular post with one envelope for each voter even though multiple voters reside in one household such as parents and children of voting age. This would be considered a “use-once” number to assure “one person one-vote one-value” and not relate to the vote being cast.

As well, an online system would have to have highly-scrupulous security measures like use of SSL (https) Web pages with even the option of an on-screen keyboard to deter keystroke logging to assure everyone of the secret ballot. Even making sure that client-side software such as mobile-platform apps are approved would be considered important to avoid the creation of “Trojan horse” apps that work against democracy by betraying users’ votes.

The Mobile Internet Devices becoming the trend for this year

GM creates a marketplace from your dashboard