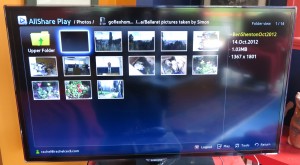 With Google Chromecast, a smart TV could become a photowall

A friend of mine who likes “scrapbook walls” as part of parties or as a way to represent their children growing up. She typically used A0 or A1 sheets of card to either glue cutouts of photos or even pinned one of these sheets up on a wall during her 21st so people can leave messages wishing her happy 21st birthday.

Google has taken this further by making the TV screen become a photowall using a Chromecast “server” app alongside client apps for iOS and Android mobile platforms and a Web page that is part of the server platform.

Here, guests can upload messages and photos on to this photowall from their mobile devices or the Web page and they appear on the TV screen associated with the Chromecast device.. There is the ability to have “tiling up” occur for the photowall with pictures come in at different sizes.

According to the article, this software is not a polished product. But I see it appeal to other software platforms such as the “smart-TV” / connected-video-peripheral app platforms or just simply the “regular-computer” platforms (Windows and MacOS X) for display functionality. It could also work well with support for user-nominated “image pools” like NAS directories, DLNA content pools, Social-Web albums or “cloud-storage” folders.

Similarly, it could support the concept of a single “content-and-control” server which could control how pictures appear on multiple screens. This could appeal to setups where you could run multiple photowalls such as during a large party.

The Google Photowall concept could be all about realising the fact that multiple pictures can be displayed at the same time in a manner that appeals to most consumers.

A network-attached storage could be the next PVR