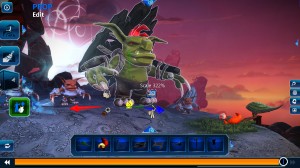 One item that Microsoft has had as its foundation stone was to allow people to develop their own computer software through the provision of the necessary tools to do this.

This started from Bill Gates writing a BASIC interpreter for the Altair microcomputer and effectively writing the BASIC interpreters for a few subsequent personal computers of the era like the Radio Shack TRS-80 and the IBM PC. In the 1990s, Microsoft had developed the Visual BASIC software to allow one cost-effectively develop software for the Windows platform that took off through that era.

Now Microsoft have fully released Project Spark which is a software-development kit to allow one to develop games for the XBox One games console along with regular computers running Windows 8.1 . People who have tinkered with the earlier beta versions of this software have used it to create extra game levels for their favourite games.

It may appear that you would have to work within boundaries when building a game or level but I would see this as a way for Microsoft to work on a games-development platform for both regular computers and the XBox One games consoles. This may also lead to a marketplace for “lean-back” console games which are developed by individuals and independent studios and, hopefully open up the console-gaming world.

Gaming with a regular computer and the big screen in the lounge?