What SAT>IP is about with satellite TV

Previously, SES Astra have launched a standard for broadcast-LAN transmission of satellite-TV signals around a home or similar computer network. This standard, known as SAT>IP or can be known as SAT-IP, is based on UPnP technology but with the ability to transmit broadcast selection and satellite selection information to the server devices.

This was initially setup for the SES Astra satellite infrastructure that was common in Europe but SES have partnered with Hispasat who are a Spanish TV satellite operator competing with them to push SAT>IP across the whole of the European TV satellite space. 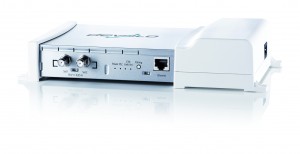 This is because an increasing number of companies are manufacturing equipment designed for this infrastructure, including Panasonic who are fielding a range of Smart TVs with client functionality. For that matter, some of their “lounge-room” TVs are offering the server functionality so they can work with the existing satellite-TV infrastructure yet pass this on to SAT>IP clients.

SES are also stepping back from promoting this standard and are putting the mantle of promotion on to the supporters and adopters who are developing the equipment. This is to encourage an operator-neutral attitude towards implementing the broadcast-LAN technology for satellite TV.

It is also worth noting that a network can have multiple SAT>IP servers on it which can also cater to multiple-dish setups where there is a goal to receive content from multiple satellite platforms, something that may be of importance in Germany especially. Who knows what this could lead to with a level playing field offered by SAT>IP.