Increasingly, data-storage device manufacturers are adding to their mobile network-attached storage devices the same kind of network-based data storage and access features typically offered with a standard desktop NAS device. This is rather than these devices just being a lightweight file server for smartphones and tablets connected to the device’s own Wi-Fi access point.

I had previously reviewed one of these devices in the form of the WD MyPassport Wireless mobile NAS which demonstrated this kind of functionality. In the review, I had called out the DLNA-compliant media server that was part of that mobile NAS’s feature set, where you had the ability to show your photos and videos on one of the latest Smart TVs via the home network the TV is connected to. 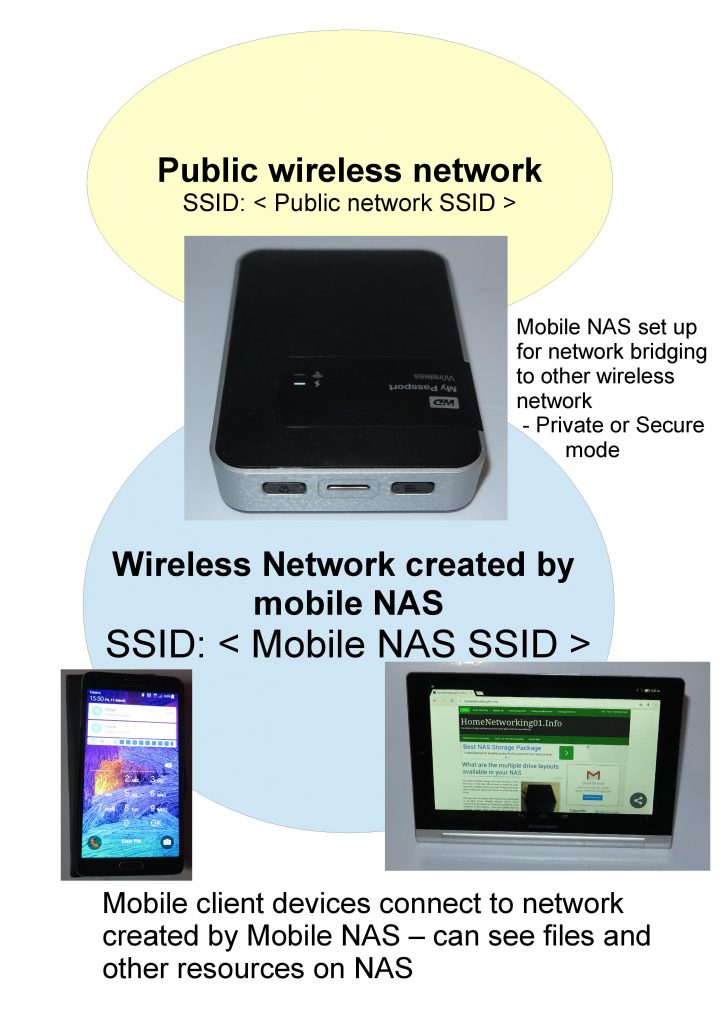 As well, some of the increasingly-sophisticated devices like the WD MyPassport Wireless Pro also are offering the same kind of Samba-based (SMB / CIFS) file transfer method that you can do with other NAS devices so you can transfer resources to these devices using your regular computer’s operating-system’s file manager and its network file transfer protocols. Similarly, the devices may implement FTP, WebDAV or other common network-file-transfer protocols primarily to allow you to upload photos and footage from your Wi-Fi-capable digital camera or camcorder to the mobile NAS if the camera honours these standard protocols.

How to have this work properly?

Here your mobile NAS unit needs to be set up for connection to an existing small Wi-Fi network as a client device of that network. It also needs to be set up to share its resources to that client network in addition to the network it creates using its own wireless access point.  Most of this configuration that I would be talking about here would be something you would do using the vendor-provided native mobile-platform app or, perhaps, a Web page that the mobile NAS creates as its management page. 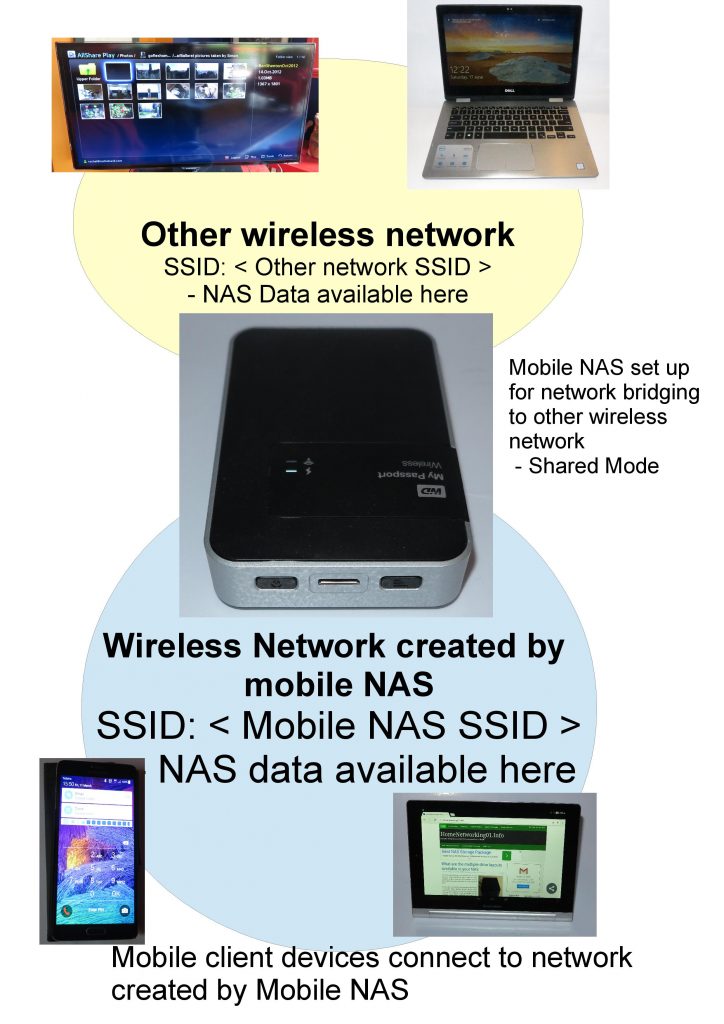 Typically, you may set this up as part of enabling a “Share Wi-Fi Connection”, “Wi-Fi Hotspot” or similar function that effectively shares a logical network connection between multiple devices that connect to the portable NAS’s access point. This function is similar to what most travel routers offer as a way to share the one logical (and usually permitted) connection to a hotel’s guest-access Wi-Fi service amongst the personal computing devices you and your travelling companions own. Similarly, this same function creates a “trust circle” between multiple devices connected to the mobile NAS’s access point allowing them to be discovered by each other even if the public-access Wi-Fi network that the NAS is connected to is configured properly with client isolation enabled.

When you enable the “hotspot” function on a sophisticated mobile NAS like the WD MyPassport Wireless / Wireless Plus series or the Seagate Wireless Plus, you will have an option to set this function to work in a “private” or “secure” mode or a “sharing” mode.  In the “private” mode, the data held on the NAS becomes available only to devices on the Wi-Fi network created by the mobile NAS’s access point. Conversely, the “sharing” mode will make the data available to devices on the network which has the Wi-Fi segment you connected the mobile NAS to as part of the “hotspot” mode.

To allow the mobile NAS to share its resources on your home network, you need to enable the “sharing” mode or disable the “secure” or “private” mode while setting up the “hotspot” functionality. It is a wise practice not to use the “sharing” mode on a Wi-Fi network used as a public-access network and this function wouldn’t work with these networks that are properly set up with client isolation enabled.

What can the manufacturers do to improve the Wi-Fi bridging functionality on these devices?

The “Wi-Fi hotspot” or “Shared Wi-Fi” functionality could be improved upon by allowing users to create preset operating modes for particular Wi-Fi networks. This would work in a similar way to the way Windows allows the user to classify each network they connect to as being a “home”, “work” or “public” network, causing it to adopt an exposed persona suitable for your home or office network or a private person for that public-access Wi-Fi network. Such parameters could be to determine whether to share resources with the host network or to always clone the client device’s MAC address when connecting along with remembered Wi-Fi network passwords.

Here, as a user connects the mobile NAS to a Wi-Fi network for “Shared Wi-Fi” operation, they are invited to save the configurations they have established for that network. Then, when they reconnect to that network, the mobile NAS assumes the operating modes that the user previously defined. These details can be referenced by the host network’s ESSID or a user-defined name for that network.

Once you know how to set up that highly-capable mobile NAS device and exploit the “private” or “shared” operating modes that these devices offer with setting up the “Shared Wi-Fi” or “hotspot” mode, you can then use them to make resources held therein available to other small networks you connect them to.