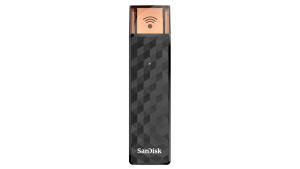 SanDisk’s memory key that is a wireless mobile NAS

There are a number of “wireless network-attached storage” devices on the market that are primarily pitched at people who use mobile devices and want to have network storage for these devices.

These devices typically work as their own Wi-Fi networks and work alongside a Web front that they provide or a native app provided by the vendor for the main mobile platforms to allow you to use them as networked storage for these devices. But those of you who use regular computers are typically required to connect these wireless NAS devices to the computer’s USB ports and use them as if they are removable storage devices.

SanDisk has released the the latest of these devices as the wireless networked equivalent of the USB memory key a.k.a. thumbdrive or jumpdrive. This device, known as the Connect Wireless Stick is the same size as a large USB memory key but has its own Wi-FI access point and Web server. There is an integrated battery and you can plug it in to a computer or USB charger to charge this device. In this same context, it can be used as a USB flash drive for the connected computer or multimedia device.

It also has the ability to work as a Wi-FI bridge for Internet connection through you setting up the Internet Connection in the SanDisk mobile app. But being a low-powered device, the SanDisk Connect Wireless Stick would have the ability to stream video content to three client devices concurrently rather than five for most of the hard-disk-based devices. Oh yeah, hang this around your neck to view content you have loaded on to it or share stuff with your buddies sitting at your lunch table in the caf – no need to forget it when you head to class.

But there are a lot of issues to be raised with these devices and how they interlink with the rest of the world. One of these involves the issue of manufacturers writing their own apps for their devices and requiring  users to install and use these apps to see full benefit from them. Here, the wireless NAS devices could use a common WebDAV or CIFS client and UPnP / Bonjour functionality for simplified discovery including the ability to discover the device’s Web page in that context. As well, the device could be managed through a password-protected Web page. This would allow for, at the most, one app to be deployed on your mobile device.

They would also have to support WebDAV and CIFS along with HTTP for two-way file transfer to and from hosts along with appropriate DLNA abilities for interaction with consumer-electronics devices. Similarly the wireless NAS devices would have to support working as clients or access points for small private networks i.e. home / small-business networks and as “go-between” bridges for public networks. This kind of functionality would require WPS and manual-entry setup for small private networks along with Wi-Fi Passpoint setup for public networks.

In essence, the wireless network-attached-storage device should be a point of innovation for everything that works with it. This includes public and private networks, consumer-electronics and photography devices along with system software for regular and mobile computing devices.

Another effort to turn a smartphone in to a pathology lab

Broadcast TV via the Internet