A major trend that has become strong over the last few years is the arrival of mobile network devices that connect to each other and to client computer devices via Wi-Fi wireless networking technology.

These are represented in the form of: 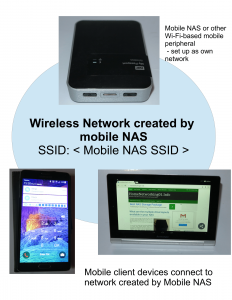 What is common about all of these devices, and is treated as a key marketing feature by their vendors, is that they can be set up to be their own access point with their own DHCP server as well as being client devices to existing wireless networks. Some of these devices like most mobile NAS devices are able to work effectively as bridges or routers between an existing wireless network and the network that they create. 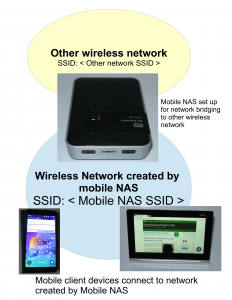 But you may want to run one or more of these wireless mobile devices together to serve multiple laptops, tablets or smartphones. Situations that may come about that will call for these setups would be where you are using a mobile NAS and, perhaps, a camera that has Wi-Fi functionality or one of the new Wi-Fi-capable mobile printers. This will call for you to create a proper mobile wireless network for all of these devices.

Use a router-class device as the main device

Here, you would have to run one wireless network device as a DHCP server and “master” access point and this function can be best served by a router-class device. 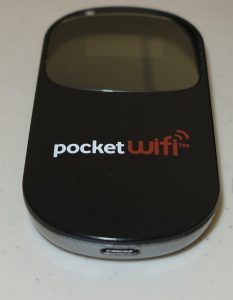 The most common examples of devices of this class that apply to “on-the-road” use are the “Mi-Fi” mobile routers that work with a mobile broadband service or one of the travel routers pitched to work with a hotel’s wired Internet service. Some mobile NAS devices may also do this wireless-bridging functionality in an adept manner and could be the hub of your “travel network”. Similarly, one of the mobile-broadband wireless routers being integrated in to some new cars by the likes of BMW and Chrysler may also answer these needs.

You may think of using your smartphone’s Wi-Fi mobile-broadband-router functionality but this may encumber your smartphone for what you want to really use it for.

Some highly-sophisticated “Mi-Fi” and travel-router devices may also expose an Ethernet connection for LAN use, perhaps through an optional extended-functionality dock. This can come in handy if you want to increase your coverage area with another wireless access point or want to use devices like games consoles with your mobile network.

You may find that you don’t need to run the Internet connection on the Mi-Fi or travel router if you are simply establishing a link between multiple mobile peripheral devices and client devices and aren’t reliant on Internet functionality for their operation. Similarly, by having your mobile devices working this way, you avoid the need to authenticate with a Wi-Fi hotspot that implements Web-based authentication to do something like gain access to your mobile NAS’s data from your iPad. 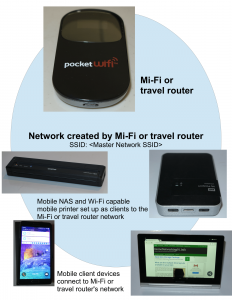 When you set up your “Mi-Fi” or travel router, you make this device the hub of your mobile network and have every device “point” to this device’s local-network by associating with its SSID (wireless network name) and security parameters.

Most of the mobile network devices that work on an “open-frame” approach can be quickly associated to this “mobile hub” thanks to WPS-based push-button setup. For devices that don’t support this quick setup mode like most Apple devices, you will need to note down the “mobile hub’s” SSID and security passphrase. Some “Mi-Fi” devices that have a display may be able to show these details on their display, perhaps at the request of the user.

For that matter, a good practice would be to assign a unique SSID for your “mobile hub” device i.e. your Mi-Fi or travel router. This is important when you use these setups in campgrounds, caravan parks or hotels where many of these devices will be used at once.

All wireless devices to link with router-class device

It will also mean that the mobile NAS, mobile printer or other similar device has to work as a client device rather than as its own access point. This also applies to your computing devices like laptops, tablets and smartphones which also associate with the “mobile hub” device.

You may find that if you want to avoid draining your “Mi-Fi” router’s battery too quickly, it may be a good idea to have it run from a USB charger that runs from house current or your vehicle’s cigar-lighter socket. Similarly, a high-capacity USB power-pack can also earn its keep with these devices if you are away from power.

What I stand for when reviewing or researching mobile devices

When I review any device for this Website that is capable of being its own wireless network such as a mobile NAS or mobile printer, I test the device with my home network’s Wi-Fi wireless segment as if it is a client device. This is so I am sure they can work in this kind of setup as well as the highly-promoted “own access point” setup. As well, as part of researching a mobile device that uses Wi-Fi wireless technology as part of its link with client computer devices, I verify that it can work as part of an existing wireless-network segment as well as being its own segment.

Similarly, when I research a mobile router-class device like a Mi-Fi or travel router, I would expect the device to support WPS single-push connectivity along with other essential Wi-Fi connectivity and security standards. Similarly, such a device would have to be easy to configure including setting up the SSID and passphrase. As well, the Mi-FI device can’t be very thirsty with its battery if the goal is to have it as a “hub” device.

Once you are able to set up a mobile multi-device network, you can then be able to use it to store or print data while you are “on the road” without needing to constantly switch networks for each different task.