Previously, in my series about the Internationaler Funkaustellung 2015 fair in Berlin, I had covered computing and home network trends like Intel Skylake chips leading to improved performance for desktop and portable computers and the steady rise of 802.11ac Wave 2 Wi-Fi wireless and HomePlug AV2 powerline networks. This was followed up with home entertainment technology which was centered around 4K UHDTV becoming more mainstream, the arrival of 4K UHD Blu-Ray Discs and HDR TV technology.

There has been a rise in the number of home-automation systems appearing on the European market with companies offering a new home-automation platform or building out their existing platform with new sensor and control devices. Most of these systems implement Zigbee or Z-Wave and use a hub or central unit that links to your home network to allow monitoring and management of these systems from your smartphone or Web-connected computer.  Some of these systems may have some sensor or output devices work with your home network’s Wi-Fi segment rather than Zigbee or Z-Wave. 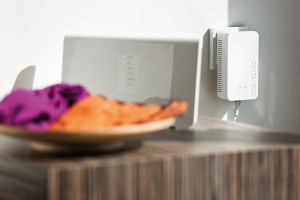 Devolo have built out the Devolo Home Control platform with more devices. This Z-Wave system started off with a central unit, a wall-mount room thermostat, a thermostatic radiator valve, a smoke alarm and a plug-in appliance module which turns appliances on and off and reports their power consumption. The central unit can link with your home network via an Ethernet or, thankfully, a HomePlug AV 500 connection both of which are more realistic in this application than Wi-Fi wireless. Now they have built it out with a motion detector, a reed-switch-based door/window contact sensor, a water sensor to detect leaky washing machines or flooded basements, and a humidity sensor. They also added an indoor siren to provide an audible alert to user-defined events; along with a wall-mount switch, light dimmer and blind/shutter controller that have to be installed by an electrician and connected to AC wiring. This system is managed by a mobile-platform app and can signal events by email or SMS text messaging.

Samsung just lately took over the SmartThings home automation initiative and brought it under their banner. This system again is based around a home-automation hub which works with Z-Wave or Zigbee along with your home network but can work with devices from other vendors like the Yale Real Living deadbolts or the Honeywell Lyric thermostats. They have also shown the SleepSense bed sensor which slips under your mattress and registers how much sleep you are getting.

Philips are building out the Hue LED-based lighting range with the Hue+ lighting strip which is effectively a string of lights. Here, you can adjust colour and control the light from your smartphone like you can with other Philips Hue devices and this can be built out to 10 metres by adding a 1-metre extension strip.

Increasing more of the appliance manufacturers are working towards an increasingly-sophisticated “app-cessory” approach to online enablement where your smartphone or tablet becomes an extra control surface that exposes increased functionality like notifying you on your smartphone when the laundry is done so you can start the next load as quickly as possible. But it is also driven by the manufacturers implementing an interlink with their resources to facilitate assisted cooking and similar functionality. 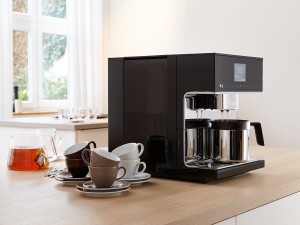 Miele has brought in the Edition Con@ct washing machine and dryer which implements an automatic detergent dispensing system and lets users know using their smartphone and the Internet if they need more of the detergent cartridges. As well, they are extending this concept to dishwashers so the app reminds you when to get dishwasher powder or tablets. They also are releasing the US-sized ovens and range-style cookers in to Europe because of the fact these bring out the “gourmet” in some European cultures. Their new CM7 touch-operated bean-to-cup superautomatic espresso coffee machine has been released as their foray in to the countertop coffee machine space and implements a “jug” function for making large quantities of coffee or milk as well as a cartridge-based automatic descaler. Miele’s newer electric induction cooktops are implementing the TempControl function for frying so you can get those eggs, sausages or “best of the kitchen” fry-up just right.

Electrolux have been showing their vision for the Internet Of Everything at this year’s IFA as far as their appliance brands are concerned. One application that they want to underscore with AllJoyn and the AllSeen Alliance is assisted cooking. One of their brands, AEG, has come forward with some connected cooking ideas including the ProCombi Plus Smart Oven. This takes the “app-cessory” concept further by using an integrated camera so you can peek at what is cooking in that oven using your smartphone or tablet which is connected via Wi-Fi.  The mobile device app will have access to their recipe catalogue which is searchable and sortable by diet, cost, occasion, ingredients and technique along with access to AEG’s social-Web channels. The ProCombi Plus Smart Oven is one of those ovens that implements wet and dry cooking in the same space so you can steam-cook the fish and roast some potatoes in the same space. The Hob2Hood rangehood is one of the first rangehoods that uses the hob or cooker as a control surface and will work with AEG’s cooktops.

Bosch Home Appliances has also headed down the connected appliance path with a fridge that has an integrated camera so you can see what is in there on your smartphone or tablet. As well, they also have other “app-cessory” functionality including system diagnostics across all of the appliance classes including their built-in bean-to-cup coffee machine. Let’s not forget that Bosch are releasing cooktops that are equipped with sensors for optmum cooking.

KitchenAid used the IFA 2015 to capitalise on the fad for sous-vide cooking by launching the Chef Touch Sous-Vide collection. This consists of a vacuum sealer, steam oven and freezer pitched for this technique with an ask of approximately EUR€10000. It isn’t just about that famous electric mixer anymore., W

Whirlpool are launching their Bauknecht sub-brand which is pitched at a “life-balanced” lifestyle for the millenial generation. This courts households with a family and career focused lifestyle and encompasses washing machines, dryers and fridges controlled by the BLive mobile app. For example, you can tell your Bauknecht washing machine what material your clothes in your washload are and the machine determines the best cycle for that job.

Samsung AddWash washing machine – you can add that sock mid-cycle

Samsung had fielded a front-load washing machine that has a door which you can open during its cycle so you can add laundry that had missed the start of the cycle like a sock’s mate. Here, you can pause the cycle and this small door unlocks while the water stays in the machine when you add that item. It also is a connected appliance which supports smartphone notification.

Philips has introduced a range of devices that work with your smartphone and tablet for “cradle to grave” personal wellbeing. For example, they have an ultrasound scanner so you can scan yourself during pregnancy and see how the new baby comes up on your mobile device. They also have the uGrow in-ear thermometer to measure baby’s temperature and show it on your smartphone as well as a baby monitor. The SoniCare electric toothbrush uses your mobile device to show you how to best clean your teeth wile the Smart Shaver 7000 system becomes an electric shaver, skin buffer or beard trimmer. They even provide a location tracking device for seniors who have the wanders.

Other brands have come to the fore like Haier with a fridge that has a door that becomes a window to what’s in there and the Neato Botvac which is a robot vacuum cleaner that connects to your home Wi-Fi network and uses your smartphone or tablet as its control surface.

What is showing up here is that the Internet Of Things is being seen as an essential product differentiator for large and small appliances while some manufacturers are building out home-automation platforms to get us going in this field. These goals will be centered around smartphones and tablets being control surfaces. Who knows what next year will bring.

Part 2 – Wearables and the Home Network

Part 4 – Home Automation and the Internet Of Things

A clear reality surfaces with the Internet Of Things