Home
Computer Systems
Laptop, Notebook and Netbook Computers
Toshiba premieres the DynaPad 2-in-1 detachable as an answer to the Surface

Toshiba is snapping at the Microsoft Surface Pro 3 detachable by offering a 12” detachable that ranks as the thinnest and lightest of this class. Like the Surface Pro 3, the Toshiba DynaPad has an ultra-thin keyboard as an option rather than as standard and the keyboard attaches to the tablet using magnets.. 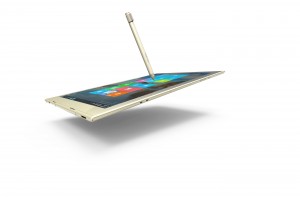 It runs Windows 10 and uses a 12” IPS display with a resolution of 1920×1280 which yields a sharp detail and wide-angle viewing. Of course it has a touchscreen but it also works with a Wacom pen that provides a handwriting experience that mimics writing on paper. As well it uses an Intel Atom processor and 4Gb RAM but there are scant details about how much storage there is in this tablet.

What I see of this is that the Microsoft Surface Pro series of detachable tablets is becoming the “reference product” for the detachable-tablet 2-in-1 class. This is more so with a lightweight design which applies whether the keyboard is detached or not. As well, a highly-responsive stylus is being seen as a product differentiator to allow for handwriting.

Similarly, it will be interesting to see if there will be a handful of 2-in-1s or other ultraportables that stand out as something to crave or be seen with, especially if they run an open-frame operating environment like Windows or Android. Or is Apple going to stay as the “one to be seen” with.

HP gives the convertible 2-in-1 the Ford Mustang treatment

Google takes on the iPhone with the Android platform