Android Auto provides a driving-friendly “extension” for your Android-based smartphone on your car’s dashboard. This yields a simplified user interface for audio, navigation, communications and allied apps so you can use them at the wheel.

Increasingly most of the vehicle builders are offering Android Auto compatible infotainment setups for most of the models with a few car-audio manufacturers running with aftermarket head units that have this functionality. But not everyone can benefit from this technology at the moment, perhaps due to a vehicle builder like Toyota not providing support or you maintaining an existing car that doesn’t have this functionality.

Google has answered this problem with version 2 of Android Auto which has the ability to use your Android phone’s screen as an Audroid Auto user interface. This is being rolled out during the current major update cycle for the Android Auto app. 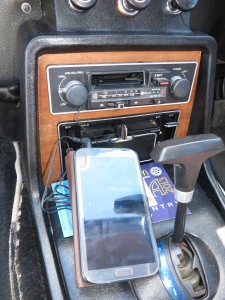 Here, you would install your phone on an in-vehicle mounting kit such as the kind that uses a suction cup to anchor to your vehicle’s windscreen. This will allow for your phone to be operated in a stable and road-legal manner while you are driving.

But you can have the sound come through your car’s speakers via a hands-free kit or car stereo that has Bluetooth communications-level or multimedia-level audio compatibility. Or you can use a 3.5mm auxiliary cable or cassette adaptor connected to your smartphone to have its sound through your car stereo. For those of us who have the Bluetooth-based setup, you can set the app to start automatically when your phone connects to the Bluetooth in-car audio device.

I also can see this benefiting the “two-wheeled” community once appropriate mounting kits become available for installation on to bikes and motorcycles. Here, they could use a Bluetooth headset or helmet and benefit from the reduced-interaction abilities that Android Auto offers so their hands are effectively on the handlebars and their eyes on the road all the time.

A good question to raise would be whether Android 2.0 could support a dual-device setup where an Android tablet could serve as a Android Auto display/control device, which could please those of us who want to integrate a 7”-8” tablet to bring Android Auto to our vehicles. Similarly, implementing Android Auto over a MirrorLink setup could open up paths for increased compatibility with infotainment setups.

The Nickname field is now of use for mobile assistant platforms