A holy grail that is being achieved for online services is to allow users to authenticate with these services when using a device that has a limited user interface.

An example of this is a Smart TV or set-top device, where the remote control for these devices has a D-pad and a numeric keypad. Similarly, you have a printer where the only interface is a D-pad or touchscreen, with a numeric keypad only for those machines that have fax capabilities.

Here, it would take a long time to enter one’s credentials for these services due to the nature of the interface. This is down to a very small software keyboard on a touchscreen, using “SMS-style” text entry on the keypad or “pick-and-choose” text entry using the D-pad.

Facebook initially looked at this problem by displaying an authentication code on the device’s user interface or printing this code out when you want to use it from that device. Then you go to a Web-enabled computer or mobile device and log in to facebook.com/device and transcribe that code in to the page to authenticate the device with Facebook.

Here, they are realising that these devices have some role with the Social Web, whether to permit single sign-on, allow you to view photos on your account or use it as part of a comment trail. But they also know that most of us are working our Facebook accounts from our smartphones or tablets very frequently and are doing so with their native mobile client app.

But they are taking a leaf out of DIAL (DIscovery And Launch) which is being used as a way to permit us to throw YouTube or Netflix sessions that we start on our mobile devices to the big screen via our home networks. It avoids a long rigmarole of finding a “pairing screen” on both the large-screen and mobile apps, then transcribing a PIN or association code from the large screen to the mobile client to be able to have it on the TV screen, 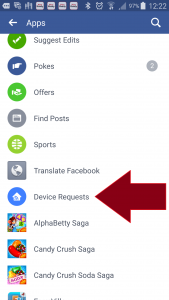 What Facebook are now doing for the 4th generation Apple TV (tvOS) and Android-based TV/video peripheral platforms (Android TV / Amazon FireTV) is to use the mobile client app to authenticate.

Here, you use a newer version of the Facebook mobile client, the Facebook Lite client or the Google Chrome Custom Tabs to authenticate with the big screen across the home network. The TV or set-top device, along with the mobile device running the Facebook mobile client both have to be on the same logical network which would represent most small networks. It is irrespective of how each device is physically connected to the network such as a mobile device using Wi-Fi wireless and the Apple TV connected via HomePlug AV500 powerline to the router for reliability.

What will happen is that the TV app that wants to use Facebook will show an authentication code on the screen. Then you go to the “hamburger” icon in your Facebook mobile client and select “Device Requests” under Apps. There will be a description of the app and the device that is wanting you to log in, along with the authentication code you saw an the TV screen. Once you are sure, you would tap “Confirm” to effectively log in from the big screen.

At the moment, this functionality is being rolled out to tvOS and Android-based devices with them being the first two to support the addition and improvement of application programming interfaces. But I would see this being rolled out for more of the Smart TV, set-top box and similar device platforms as Facebook works through them all.

One issue that may have to crop up would be to cater for group scenarios, which is a reality with consumer electronics that end up being used by all of the household. Here, software developers may want to allow multiple people to log in on the same device, which may be considered important for games with a multiplayer element, or to allow multiple users to be logged in but with one user having priority over the device at a particular time like during an on-screen poll or with a photo app.

Another question that could be raised is where Facebook is used as the “hub” of a user’s single-sign-on experience. Here, an increasing number of online services including games are implementing Facebook as one of the “social sign-on” options and the improved sign-on experience for devices could be implemented as a way to permit this form of social sign-on across the apps and services offered on a Smart TV for example. It could subsequently be feasible to persist current login / logout / active-user status across one device with all the apps following that status.

Other social-media, messaging or similar platforms can use this technology as a way to simplify the login process for client-side devices that use very limited user interfaces. This is especially where the smartphone becomes the core device where the user base interacts with these platforms frequently.