Previous HomeNetworking01.info coverage on this topic

My Comments and advice

A key issue that is affecting how newsworthy events are covered and what people should become aware of in the news is the rise of propaganda, satire and similar information disguised as news. This situation is being described as “fake news”, “post-truth” and “alternative facts” and a significant number of academics have described it as a reason why Donald Trump became President of the USA or why the British citizens wanted the UK to leave the European Union.

I am giving some space in HomeNetworking01.info to the fake-news topic because an increasing number of people are obtaining their daily news from online sources using a smartphone, tablet or computer. This may be in addition to the traditional papers or the radio or TV newscasts and current-affairs shows or in lieu of these resources.

There have been many factors that have led to a fertile ground for fake news to spread. One of these is that most of us are using online search / aggregation services and social media as our news sources. Similarly, due to reduced circulation or ratings, various well-known news publishers and broadcasters are cutting back on their news budgets which then reduce the number of journalists in the newsroom or reduce news coverage to a quality not dissimilar to a news bulletin offered by a music-focused radio station.

Add to this the fact that it is relatively cheap and easy to set up a Website that looks very enticing thanks to low-cost “no-questions-asked” Web-host services and easy-to-use content management systems. It has led to the rise of Websites that carry propaganda or other material dressed up as news with this material being of questionable accuracy or value. Let’s not forget that it is easy to use Twitter or Facebook to share articles with our friends or followers especially if these articles support our beliefs. 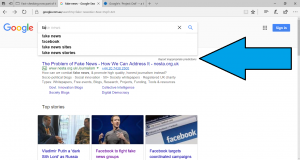 It is also made worse by the cross-border nature of the Internet where one can set up a Website or social-media presence in one country to target citizens in another country with questionable messages. This makes it easier to run the propaganda but avoid being caught out by a broadcast-standards or election-oversight authority or the judicial system in the target jurisdiction.

The fact that the UK are going to the polls for a general election this year means that Britons will become more vulnerable to the fake-news phenomenon. This is a situation that is also affecting France and Germany, two of continental Europe’s major economic, political and population centres who either are in the throes of completing a general election. 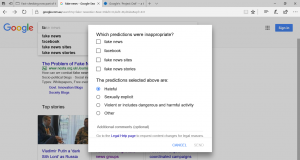 The Chairman of the Culture, Media and Sport Committee, Damian Collins (Conservatives), has raised this issue concerning Facebook and urging them to filter out fake news. This is although Silicon Valley have been taking steps to combat this problem through the following actions:

Look for information that qualifies the kind of story if you are viewing a collection of headlines like a search or news-aggregation site or app. For example, Google has implemented tagging in their Google News aggregation site and apps such as “satire”.

Trust your gut reaction to that claim that is being offered in that Facebook post before you share it. If you find that the story sounds like exaggeration or is “off the beam”, it sounds like fake news. As well, the copy in many fake-news articles is written in a way to whip up anger or other immediate sentiment.

Check the host Website or use a search engine to see if trusted sources, especially the ones you trust, are covering the story. As well, if your browser offers a plug-in or extension that highlights fake-news and questionable content, it may be worth adding this feature.

Following news from one or more trusted news sources (including their online presence) may be the way to go to verify news being pushed around on the Internet.

For example, switching on the radio or the telly for the news may be a good idea so as to be sure of what really is going on with this election. In the case of the radio, you may find that BBC Radio 4, BBC Local Radio or a talk-focused independent station like LBC may be the better resource for deeper coverage of the election. Music stations who are part of the same family as a news or talk station such as the BBC stations or Capital, Heart and Classic FM who are part of the same family as LBC can also be of value if you use their short news bulletins as a news source. This is because their news bulletins are fed by the newsroom that serves the talk station.

As well, visit the online sites offered by trusted publishers and broadcasters to check the news in relationship to what the parties are saying. It also includes heading to Websites operated by the various parties or candidates so you can get the facts and policies “from the horse’s mouth”.

You also must take advantage of the feedback loop that Facebook, Google and other online services offer to call out questionable content that appears during the election period. Typically this will be options to report the content or autocomplete hit as something like being inappropriate.