Home
Internet Access And Service
Next-generation broadband service
What is G.Fast all about?

G.Fast could be the next step for DSL-based fibre-copper broadband setups

There is a newer iteration of the DSL physical-loop network connection standards that has shown up on the scene lately. It is known as G.Fast and is intended for fibre-copper layouts that encompass a longer fibre run from the exchange or central office.

This is an improvement over the VDSL2 family of standards currently used for fibre-copper setups where there is a longer copper run, such as “fibre-to-the-node” or “fibre-to-the-cabinet” setups. What it is capable of is a bandwidth up to a Gigabit / second over a 500 metre copper run. 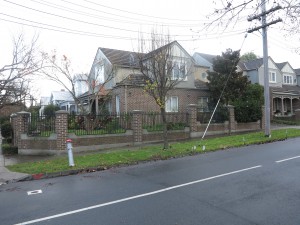 It could be about fibre to the front yard here

What has happened lately is that a compatibility-testing regime for this standard has been launched thanks to a number of laboratories who are undertaking these tests. As well, it is being put on the map as far as a copper-based last-mile communications standard goes.

or high-speed fibre to the basement in these apartment blocks

There is interest in this technology for use as part of next-generation broadband setups where fibre and copper are used in the link, but it is targeted towards relatively-short copper runs.

Examples of these are:

Some of these deployments that serve few premises permit the use of a single-premises DSLAM box that is the size of a shoehox or, more realistically, one of those “shoebox-form” cassette recorders prevalent through the 1970s as an entry-level cassette recorder. This can be installed in an access pit or attached to a telegraph pole and could be “reverse powered” by the subscriber’s modem or a power injector installed on the subscriber’s premises.

The advantage being pitched is that a subscriber can head to “next-generation” Internet even if they are in a predicament that restricts or prohibits the deployment of new street-premises wiring infrastructure. This could range from brick or stone houses where it is costly in time and money to pull new wiring, through the desire to preserve a carefully-landscaped garden, to tenants who have to seek their landlord’s permission to install infrastructure, along with being sure someone is home to supervise the technicians installing the infrastructure.

Let’s not forget that a fibre-to-the-distribution-point setup or a fibre-to-the-building setup can also be ready for Gigabit broadband once G.Fast is implemented. There may also be the idea of using these DSLAMs as part of level-based telecommunications infrastructure in the high-rise buildings to assure high bandwidth across the development.

At the moment, G.Fast service customers will need to be supplied with a G.Fast DSL modem which they connect to their broadband router’s Ethernet WAN socket and the telephone line. This will happen as part of signing up to these next-generation Internet services that use that technology. But very soon it will lead towards the arrival of a subsequent generation of DSL modem routers that are equipped with a G.Fast / VDSL2+ / ADSL2+ modem as a WAN (Internet) connection option.

G.Fast will end up being suitable for population-dense urban areas being served by a fibre-optic next-generation broadband service as long as the copper cable run goes as far as the street.

Switching telephone and broadband in the UK