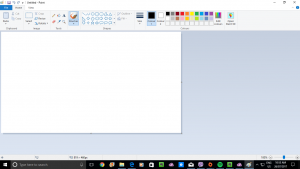 Microsoft Paint isn’t dead yet, will live in the Windows Store for free | The Verge

Classic MS Paint is coming to the Windows Store, for FREE! | Windows Central

Recently the computer press has been awash with articles that Microsoft was killing the Paint app that always came with Windows since 1.0 . But they are keeping it available for Windows users to continue working with by allowing them to download it for free from the Windows Store.

The Paint app was simply a basic bitmap-driven graphics editor that allowed users to get used to using a mouse for creating computer graphics. It was based on ZSoft’s PC Paintbrush which was the PC’s answer to the various baseline graphics editors that came with every mouse-driven graphical user interface since 1984 when that kind of computing came on board with the Apple Macintosh.

This app ended up being the answer for any basic computer-graphics work at home or in the office, whether it be children creating computer drawings through to designers creating rough prototypical images of what they are designing in the office. I have infact used Paint as part of creating screenshots for this Website by editing the various screenshots whether to redact private information or to call out particular menu options that I am talking about in the accompanying article. This was thanks to an easier learning curve that this software implemented from Day 1.

A common fear that I would have expressed in relation to the press coverage about Microsoft abandoning or paying less attention to Paint and other bundled or cost-effective graphics tools (remember PhotoDraw?) is that they could end up stripping down their application-software portfolio of titles seen to be less valuable. Then they would just focus their efforts on the popular premium business software like the “Office” essentials such as Word, Excel and PowerPoint.

At least those of you who buy a computer with Windows 10 Fall (Autumn) Creators Update in situ don’t have to miss that basic Paint app because it’s not delivered “out of the box”. Rather they can raid the Windows Store and find this app.

But could this be the path for evergreen software that was always distributed for free as a standalone package or with operating systems like graphics or sound editors by the major operating-system vendors?