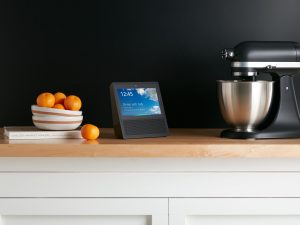 A trend that is surfacing for the voice-activated home assistant device is for these devices to provide a display which works alongside the voice-activated assistant by providing some sort of visual feedback. The display can be physically integrated in the smart speaker or similar device or appear on another device that ties in with the home-assistant device such as a TV equipped with a Chromecast or similar dongle. 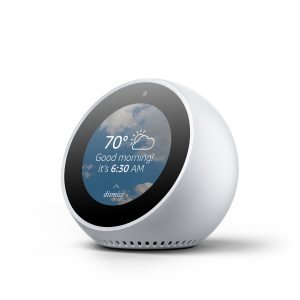 Amazon Echo Spot – the smaller brother of the Echo Show

Amazon kicked this off with the Echo Show that has an integrated colour touchscreen and augments Alexa replies with visual information as well as being an IP-based videophone. Then Sony integrated a clock display in to their Google Assistant speaker that was being premiered at IFA this year.

Now Amazon premiered their Echo Spot which is about the size of a traditional alarm clock and uses a circular touchscreen as its display. This device was being offered as the smaller bedroom-friendly version of the Echo Show.

But what is this functionality about?

This functionality is about providing visual support to a user’s interaction with a device that is based on a voice-driven home assistant platform. This can range from constantly-displayed information like the current time or the weather to written information that augments an answer offered by Alexa or the Google Assistant. It can also be information that is dependent on current or upcoming events like reminders, information about the music that is playing through the device or the status of an appliance or other device connected to your smart-home setup.

Setups that implement a colour graphical display, whether integrated or as an outboard screen, could take this concept further with photos, album cover art and other material that are part of the visual interface. Examples of this could be Alexa showing pictures of restaurants in response to a query about the best-value eats in town or the device being an electronic picture frame, referring to a collection of photos hosted on the network or the cloud. Let’s not forget that devices with a colour graphical display would implement the screen as a display for a compatible network video-surveillance camera or video intercom.

Of course, whoever programs the skills for Alexa, Google Assistant or other similar platforms will be wanting to write in the visual support and have to provide text as a baseline visual display. Personally I would see this feature as part of how Amazon Alexa, Google Home, Cortana and Siri will evolve in the voice-activated home assistant context.

Honeywell launches the answer to the NEST thermostat

With two new standards in the works, we could be approaching the Gigabit wireless network

Microsoft to allow Android apps to run with Windows