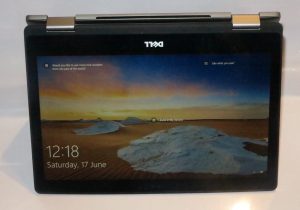 Intel are releasing the eighth-generation lineup of CPU processors which have been considered a major step when it comes to performance from the “engines” that drive your computer. This is affecting the the Core i family of processors which are used in most desktop and laptop computers issued over the last few years.

This class of CPU has impressed me more with the arrival of ultraportable computers, especially 2-in-1 detachables and convertibles, that could do more than what is normally associated with this class of computer.

It is brought about through an increase in the number of “cores” or processor elements installed in the physical chip die, similar to the number of cylinders in your car’s engine which effectively multiply the power available under that hood. In this case, the improvements that Intel were providing were very similar to what happened when the “V” configuration was implemented for engine-cylinder layouts that allowed more power from a relatively-compact engine, allowing the vehicle builder to offer increasingly-powerful engines for the same vehicle design.

In this case, there was the ability to use low-power processors like 15-watt designs with the increased “cores” but not sacrifice battery runtime or yield too much waste heat. This opened up the capability for an ultraportable or tablet to be able to do more without becoming underpowered while running for a long time on battery power.

For example, HP just released the ZBook x2 detachable tablet computer which has the kind of power that would work with advanced graphics and allied programs. Some could see this as a typical detachable tablet that could be considered not so powerful but this handheld workstation can use these programs thanks to use of the Intel 8th Generation Core i7 Kaby Lake R processor and NVIDIA Quadro discrete graphics. There is even the option to have it specified with 32Gb of RAM.

Then there’s Dell who have refreshed their XPS and Inspiron ultraportables with Intel 8th-generation horsepower with the XPS 13 benefiting from that extra performance, making the whole XPS 13 clamshell Ultrabook lineup show its relevance more.

What is to happen with the ultraportables is that you won’t need to think of them as being unfit for heavy-duty computing tasks while on the road. You may even find that you could do things like watch a season of downloaded TV episodes or play an intense round of Civilization 6 while you are flying one of the new Qantas non-stop long-distance flights to London or Los Angeles without worrying about the battery dying out.

It will be up to the software vendors to make games and other software that take advantage of these high-performance 2-in-1 computers by exploiting the touchscreens and the higher power offered by these machines. How about a Civilization, SimCity, one of the mobile “guilty-secret” games, or more being available through the Microsoft Store for one to install on that 2-in-1?

Creating a small data cloud–why couldn’t it be done