Home
Industry Comments
It is time for YouTube to face competition

Over the last many years, YouTube established a name for itself regarding the delivery of user-generated video content through our computers. This included video created by ordinary householders ranging from the many puppy and kitten videos through to personal video travelogues. But a lot of professional video creators have used it to run showreels or simply host their regular content such as corporate videos and film trailers, with some TV channels even hosting shows for a long time on it.

After Google took over YouTube, there have been concerns about its availability across platforms other than the Web. One of the first instances that occurred was for Apple to be told to drop their native YouTube client from iOS with users having to install a Google-developed native client for this service on their iOS devices.

Recently, Google pulled YouTube from Amazon’s Echo Show device ostensibly due to it not having a good-enough user interface. But it is really down to Google wanting to integrate YouTube playback in to their Google Home and Chromecast platforms with the idea of running it as a feature exclusive to those voice-driven home assistant platforms. 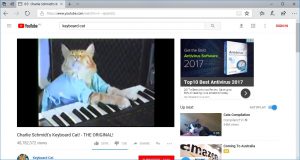 Could the Web be the only surefire place to see Keyboard Cat?

These instances can affect whether you will be able to view YouTube videos on your Smart TV, set-top box, games console, screen-equipped smart speaker or similar device. It will also affect whether a company who designs one of these devices can integrate YouTube functionality in to these devices in a native form or improve on this functionality through the device’s lifecycle. The concern will become stronger if the device or platform is intended to directly compete with something Google offers.

There are some video services like Vimeo and Dailymotion that offer support for user-generated and other video content. But these are services that are focused towards businesses or professionals who want to host video content and convey a level of uninterrupted concentration. This can be a limitation for small-time operators such as bloggers and community organisations who want to get their feet wet with video.

Facebook is starting to provide some form of competition in the form of their Watch service but this will require users to have presence on the Facebook social network, something that may not be desirable amongst some people. Amazon have opened up their Prime streaming-video platform to all sorts of video publishers and creators, positioning it as Amazon Video Direct. But this will require users to be part of the Amazon Prime platform.

But for people who publish to consumer-focused video services like YouTube, competition will require them to put content on all the services. For small-time video publishers who are focusing on video content, this will involve uploading to different platforms for a wider reach. On the other hand, one may have to use a video-distribution platform which allows for “upload once, deliver many” operation.

But there has to be enough competition to keep the market sustainable and each of the platforms must be able to support the ability to view a video without the user being required to create an account beforehand. The market should also support the existence of niche providers so as to cater to particular publishers’ and viewers needs.

In conclusion, competition could make it harder for YouTube to effectively “own” the user-generated consumer video market and control how this market operates including what devices the content appears on.

Skully to develop a motorcycle helmet with heads-up display