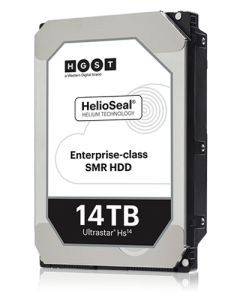 Western Digital had broken the record for data stored on a 3.5” hard disk by offering the HGST by WD UltraStar HS14 hard disk.

This 3.5” hard disk is capable of storing 14Tb of data and has been seen as a significant increase in data-density for disk-based mechanical data storage. It implements HelioSeal construction technology which yields a hermetically-sealed enclosure filled with helium that leads to thinner disks which also permit reduced cost, cooling requirements and power consumption.

At the moment, this hard disk is being pitched at heavy-duty enterprise, cloud and data-center computing applications rather than regular desktop or small-NAS applications. In this use case, I see that these ultra-high-capacity hard disks earn their keep would be localised data-processing applications where non-volatile secondary storage is an important part of the equation.

Such situations would include content-distribution networks such as the Netflix application or edge / fog computing applications where data has to be processed and held locally. Here, such applications that are dependent on relatively-small devices that can be installed close to where the data is created or consumed like telephone exchanges, street cabinets, or telecommunications rooms.

I would expect that this level of data-density will impact other hard disks and devices based on these hard disks. For example, applying it to the 2.5” hard-disk form factor could see these hard disks approaching 8Tb or more yielding highly capacious compact storage devices. Or that this same storage capacity is made available for hard drives that suit regular desktop computers and NAS units.