Dell has been improving their value-for-money portable computer product line and premiering some of these new products in Las Vegas at the Consumer Electronics Show 2019. Here I am calling out a few distinct improvements across the different product lines as supplied through their press material.

Some options that have been cropping up include a 1Tb solid-state disk in most product lines, NVIDIA RTX ray-tracing video chipsets in gamimg models and OLED displays in premium 15” models. But there are some computers out there that have some interesting features like a small built-in Webcam or “walk-up and sign-in” operation.

Improvements to the XPS 13 Ultrabook

Dell have been incrementally improving on the XPS 13 Ultrabook by releasing the latest iteration known as the 9380 model. But this iteration isn’t just based around its silicon although it implements Intel 8th-Generation Whiskey Lake technology.

One of the main useability improvements is for the Webcam to be located in its proper position above the screen rather than below the screen as with some previous generations. This avoids videocall situations where your correspondent is looking at the ceiling or your nose when you use the Webcam located at the bottom of the screen. The problem was brought about due to Dell’s InfinityEdge “thin-bezel” approach which didn’t allow for room for a standard Webcam circuit. But it had been solved through the use of a 2.5mm Webcam circuit that allowed for a thin top bezel for the screen. 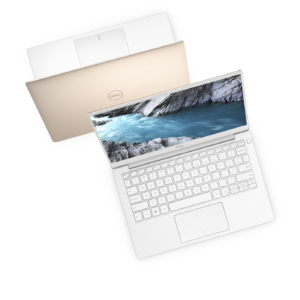 It also implements a variable-torque hinge to make it easy to open and close, something that may please older users with hands that may not be all that great thanks to arthritis for example. Another feature that Dell is pushing is to have a fingerprint reader integrated in the power button on the computer.

The latest iteration of the Dell XPS 13 underscores the USB-C connectivity form by having three connections of this kind – two Thunderbolt 2 connections and a USB-C-only connection. This is alongside an audio jack which hasn’t been forgotten about as well as a microSD card reader.

The Dell XPS 13 is available with 8th-generation Intel “Whiskey Lake” Core CPUs (i3, i5 or i7) and Intel UHD 620 integrated graphics. It will have up to 16Gb RAM and 2Tb SSD as non-volatile storage. There will be three display options – a Full HD non-touch screen, a Full-HD touch screen or a 4K UHD touch screen. There is an expected 21-hour battery runtime for an XPS 13 equipped with a Full-HD display which will allow continuous use on one of the new non-stop longhaul flights facilitated by the Boeing 787-9 Dreamliner.

What is being underscored here is the idea of keeping the Dell XPS 13 as the value-for-money Ultrabook that “ticks the boxes” as far as “thin-and-light” clamshell-style portable computers go. Here, it is through implementing the latest technology and answering problems that the user base and computer press have raised about this model.

The CES 2019 exhibition became the time for NVIDIA to premiere their RTX family of ray-tracing-capable graphics processors. Dell was one of the first computer manufacturers to offer a gaming-grade computer as part of their main brand with this silicon as a configuration option.

Here, the G-Series gaming laptop range has effectively been refreshed with new Intel CPUs and the NVIDIA RTX graphics chipsets. The G-series laptops are different from the Alienware gaming brand where they are positioned with a similar approach to the “GT” or “Sport” variants of popular mainstream passenger cars which have the higher-performance powertrains.

But in some ways, these computers can be seen as an entry-level workstation for photo and video hobbyists or students starting on high-end graphics-focused computing like with architecture or statistics.

The economy option for the display subsystem is an NVIDIA GTX 1050Ti GPU but the computer will have the Ethernet port and a USB-C port as its system-specific connections. All of the new G-Series computer can be configured with any of the RTX GPUs which will also have 8Gb of display RAM. They will have the USB-C, Thunderbolt 3 and mini DisplayPort connections as their configuration-specific options.

The common connection options would be 3 USB 3.1 Type-A ports, an SD card reader, an audio jack as well as those extra configuration-specific ports.

The 17” model has fewer screen options in the form of a full HD IPS screen with 300nits brightness but a choice of 60Hz or 144Hz refresh rates.

OLED screens as a configuration option for premium Dell laptops

Speaking of OLED display technology, the XPS 15 thin-and-light, Alienware m15 premium gaming and the Dell G7 15  are able to be equipped with OLED displays rather than LCD displays. These will also be able to support high dynamic-range vision using technologies like Dolby Vision. This will make these computers appeal towards photo and video professionals who look out for increased photo-grade dynamic range, 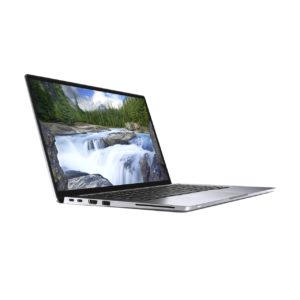 This is a rare sight for the Consumer Electronics Show where a computer manufacturer is premiering a business-grade computer at a consumer-focused technology fair. But small-business owners may find this of value if they buy their technology through an independent computer store or value-added reseller.

Here, Dell are premiering the Latitude 7400 14” business 2-in-1 which has features that make it stand out from other business computers in its class. Here, this computer which has a Titan Grey finish is the smallest business-grade 14” 2-in-1 convertible laptop on the market.

It also has the ExpressSignIn feature that detects user presence near the machine. When the user comes near, it will wake up and activate the Windows Hello facial-recognition routine to verify that the user is authorised to operate the machine. Then, when the user walks away, the Dell Latitude 7400 will lock the user session.

It has 2 Thunderbolt 3 connections as standard and, as specifiable options, Gigabit LTE mobile broadband, 1Tb solid-state drive, Wi-Fi 6 and Bluetooth 5 connectivity. The 1Tb solid-state drive’s capacity will please those of us who effectively “live out of their briefcase” but want the high performance. As is expected for a premium business laptop, this will have the security and manageability features that would please a corporate IT team or a value-added reseller offering “big-time” IT support to small businesses.

The Dell Inspiron 7000 Series 2-in-1 convertible laptops have undergone some significant revision in their design.

Rather than having an ordinary hinge, these computers have a new hinge design with a place to park the supplied active pen. This means that the pen is presented to the user without it falling out no matter whether the computer is folded over as a tablet, in a partially-folded “tent” or “media-viewer” state or a traditional laptop. It also makes sure that the hinge part looks special, as well as being part of an improved cooling and ventilation approach that understands lifestyle computing needs like bingeing on Netflix in bed or “flipping through” YouTube videos on the couch.

The improved cooling and ventilation approach is also augmented through adaptive thermal-management technology which varies the Inspiron 7000’s performance depending on whether you are moving it around or keeping it still on your desk. This avoids you handling a portable computer that is running uncomfortably hot.

The integrated power switch / fingerprint reader design has opened up a design feasibility for the 15” variant of the Dell Inspiron 7000 Series. Here, it means that the computer can be equipped with a numeric keypad which is a rarity amongst 15” 2-in-1 computers.

Dell is keeping up its name as a value-for-money computer name but is assuring users that they are creating innovative designs rather than copying established ones.

GM creates a marketplace from your dashboard