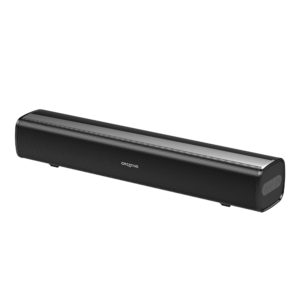 Creative Labs recently launched a small desktop soundbar that is being positioned as a viable single-piece alternative to the traditional computer speakers setup. If you did want a right-sized single-piece speaker setup for your computer, you would have used a small Bluetooth speaker or a boombox with a line input.

Here, it is being pitched towards desktop computer users who either are using an all-in-one desktop computer; or a traditional “three-piece” computer setup with the monitor, system unit and keyboard. 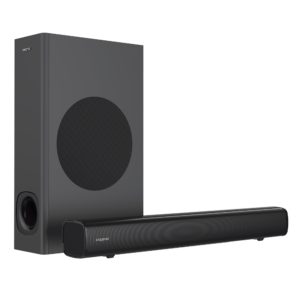 This capitalises on Creative Labs pedigree in relationship to computer audio – who remembers themselves or a computer enthusiast they know installing a Sound Blaster sound card made by this firm in their computer through the years? It also includes their merger with Cambridge Soundworks who designed different “personal” speaker products advertised in American magazines through the 1990s.

This soundbar, known as the Stage Air, is a stereo device with a full-range speaker driver per channel along with a passive radiator to provide improved bass response. That speaker-arrangement technique had been used with some boomboxes made during the 1980s and 1990s as a way of improving their bass response in a power-efficient manner for portable applications. It is rated by Creative for 5 watts RMS per channel with a 20 watt peak output.

The Stage Air soundbar can fit underneath your computer monitor or all-in-one computer and connects to the host computer using a line-level connection with a 3.5mm stereo jack. But it has Bluetooth connectivity and a battery that can run for six hours on a charge allowing it to be a Bluetooth speaker for your laptop, tablet or smartphone. There is also the ability to connect a USB memory key to the Stage Air soundbar to have it play MP3 audio files held on that memory key.

There are controls on the speaker to regulate the volume so you don’t have to fuss around with your operating system’s sound icon to quickly adjust the sound. When it serves as your desktop speaker, you can have it normally powered by a USB power source like your computer or a USB charger.

From all of the material that I have read about this product, it is being pitched as something that can fill a small office or similar space with sound, something that would be akin to typical desktop computer speakers or a small boombox.

It is being offered as the junior brother to the Stage soundbar which has more power output and can fill a larger area with sound. Some press material even described this soundbar as being better than most low-priced entry-level soundbars. This unit uses a midrange speaker for each stereo channel and works alongside an external narrow-profile subwoofer for the bass.

This uses an infra-red remote control so you can select different frequency-response curves to adjust how it sounds. This has the Bluetooth and line-in connectivity but also has an optical input and HDMI-ARC TV connection, but it could also have an HDMI input so you can connect a video peripheral to it incase you displaced one that was connected to your TV’s ARC-enabled HDMI socket.

What I see of these products is that Creative Labs are filling in gaps for high-quality single-piece soundbar speakers that can answer your needs whether as something for your desktop or laptop computer or as an entry-level soundbar setup for your Smart TV.