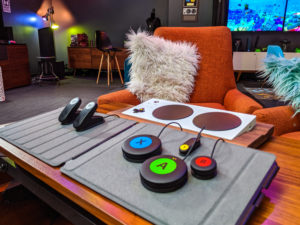 Microsoft went all in on accessible design. This is what happened afterwards | FastCompany

Recently, Microsoft launched the XBox Adaptive Controller as an accessible games-console controller for people who face motion and dexterity-related disabilities. They even promoted it in a TV commercial ran during this year’s Super Bowl football match, which would have been considered to go against the grain for the usual sporting and video-game audiences.

This has been part of Microsoft’s step towards inclusionary gaming and I had written in the article about that controller not just to focus towards providing video gaming for disabled people. But I also called out the therapeautic value that some games can have for elderly people as well as disabled people with Microsoft offering a lower barrier to entry for independent game developers to create games that underscore that concept.

It has actually been underscored in a recent CNET video article about the XBox Adaptive Controller being used to help a US war veteran who lost some of his motion and dexterity in a motorcycle accident.

But Logitech have taken this a step further by offering an accessory kit with all the necessary controls for US$99. This kit, known as the Adaptive Gaming Kit, makes it more affordable for these people so you can have an accessible gaming setup to suit your particular needs without having to choose and buy the necessary accessories. Here, it is important especially if a person’s needs will change over time and you don’t want to have to buy newer accessories to suit that need.

The package comes with rigid and flexible mats with Velcro anchor points for the various buttons and other controls. The flexible mats can even allow the controls to be anchored around a chair’s arms or other surfaces while the whole kit can allow for the equipment to be set up and packed up with minimal effort. The controls all have their own Velcro anchor points and screw holes for anchoring to other surfaces.

Logitech used their own intellectual capital in designing the kit while working with Microsoft to evolve the product. Here, they implemented their own mechanical-switch technology that is part of their high-end keyboards including their low-profile switches used in their low-profile keyboard range. The large buttons have stabilisers built in to them so you can press them from anywhere on the button’s surface. This leads to them not reinventing the wheel when it comes to the product’s design or manufacture because of the use of common technology.

What I have liked about Logitech’s Adaptive Gaming Kit is that the idea of accessible gaming comes at a price point that represents value for money. This is compared to various assistive-technology solutions which tend to require the user to pay a king’s ransom to acquire the necessary equipment. It has often led towards the government or charitable sector not getting their money’s worth out of their disabled-person support programs due to the high cost of the necessary technology.

Welcome to the new age of making assistive technology become more mainstream, not just for disabled users but for the realities associated with the ageing population such as ageing Baby Boomers and people living longer.