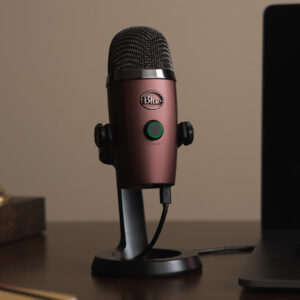 Increasingly as we create and post content online, we are realising that microphones are becoming a valuable computer accessory for recording or broadcasting our voices or other live sound. This is more so where we are making podcasts or videos or even streaming video games with our own commentary, with this kind of content creation becoming a viable cottage industry in its own right.

Even videoconferencing with Zoom and similar software has had us want to use better microphones so we can be heard clearly during these videocalls. This was important while stringent public health measures were in place to limit the spread of the COVID coronavirus plague but is now coming in to play with hybrid (online and face-to-face) work and education settings that we are taking advantage of.

What we are realising is that the integrated condenser microphone in your laptop computer or Webcam isn’t really all that up-to-scratch for this kind of content creation. This is similar to the days of the cassette recorder where people who aspired to make better live recordings stopped using their tape recorder’s built-in microphone and used a better quality external microphone.

The USB microphone has at least one microphone element directly connected to an integrated audio interface. This converts the sound picked up by the microphone into a digital form useable by the host computer.

Some of these microphones have an audio-output function which feeds a headphone jack so you can monitor what you are recording or broadcasting with a set of headphones. You may even find that some USB microphones have a microphone-level analogue audio output so you can connect them to a traditional audio device rather than just a computer.

An increasing number of manufacturers will often supply audio-processing software that performs equalisation, level control or dynamic-range control on the host computer. Or the digital-audio recording software that you use on your computer will be able to do this function for you. All of this audio processing happens in the digital domain using your computer’s CPU or GPU.

The integrated audio interface allows designers of these USB microphones to set up a sophisticated array of multiple microphone elements in these microphones. This would allow for them to work as one-point stereo microphones or use microphone-array techniques to determine their sensitivity or pickup pattern. You may find that you determine how these sophisticated microphones operate through manufacturer-supplied software or perhaps a hardware switch on the microphone.

The Behringer UltraVoice XM8500 microphone – an example of a traditional microphone

The common traditional microphone makes the sound that it picks up available as a low-level analogue signal. They are designed to be connected to an amplifier, recording device, mixing desk or other audio device that has an integrated microphone amplifier circuit.

This would be either a balanced or unbalanced signal depending on whether the microphone is for professional or consumer use. It is although most value-priced professional-grade mono dynamic microphones typically pitched for PA and basic recording use can work as balanced or unbalanced mics. That is thanks to the mic’s cable connected to the mic itself via an XLR plug even though the cable would plug in to the equipment using a 6.35mm mono phone plug.

There are electret-condenser microphones that work in a different way to the common dynamic microphone but these are dependent on a power source. This is typically provided by a battery that is installed in the microphone or through the associated equipment offering “phantom power” or “plug-in power” to these microphones via their cable.

If you use a traditional microphone with your computer, you would need to use an audio interface of some sort. The traditional sound card installed in a desktop computer or some basic USB audio interfaces that you use with your laptop computer would offer a 3.5mm phone-jack microphone input which would be mono (2-conductor) at least or may be stereo (3-conductor) so you can use a one-point stereo mic. These could work well with a wide range of microphones that have this connection type, typically those pitched at portable-recorder or home-video use.

Then the better USB audio interfaces would offer either at least one microphone input in either a 6.35mm phone jack or three-pin XLR socket, most likely offering a balanced wiring approach. You can still use a mic that has a 3.5mm phone plug if you use an adaptor that you can buy from an electronics store.

Let’s not forget that a significant number of microphone manufacturers offer USB audio interfaces that plug in to their microphone’s XLR socket. These adaptors such as the Shure X2U are powered by the host computer USB interface and, in a lot of cases, provide the “phantom power” needed by electret-condenser microphones.

It is also worth noting that the better quality USB audio interfaces will do a better job at the sound-handling process and will yield a high-quality signal. This is compared to the audio interface in your laptop computer or Webcam, or baseline soundcards and USB audio modules which may not make the mark for sound quality.

A USB microphone is valuable for laptops or small desktop computers and is only intended where you are using the software on your computing device to record or broadcast.

You may end up getting more “bang for your buck” out of a USB microphone purchase due to the integrated audio-interface design that they have. This may be of value to people starting out in podcasting or similar audio-recording and broadcasting tasks and want a low-risk approach. As well, you may find them easy to set up and use with your computer especially where the microphone relies on class drivers supplied by the operating system rather than proprietary driver software.

USB microphones are considered to be more portable because you don’t need to carry a USB audio interface with you when you intend to record “on the road” with your computer.

Another advantage is that you have a very short low-level unbalanced analogue audio link between the microphone elements and the signal-processing electronics, This means that you end up without the risk of AC hum or other undesirable noise getting in to your recording due to a long unbalanced low=level audio link.

You may find it difficult to use a USB microphone with a digital camera or camcorder. This is because not many of them provide USB Audio device support for microphones and similar devices and they may not eve have a host-level USB connection for any peripherals. Similarly, you may find it difficult to use them with most mobile-platform devices because of the way some versions of iOS or Android handle them.

A traditional microphone with a common connection type excels when it comes to versatility. This is more important where you intend to use them with a wide range of audio devices like recording equipment or mixing consoles. Similarly they excel when it comes to microphones that have particular sensitivity and audio characteristics out of the box.

It also comes in to its own when you want to record with a tape recorder or other standalone recording device to assure recording reliability. This use case includes the use of external microphones with your video equipment to have better sound on your video recordings.

Some users may find that connecting traditional mics to their computer via a mixing console of some sort may give them better hands-on control over how their recordings or broadcasts will sound. Here, you may find that some of the newer mixing consoles are likely to have their own USB audio interface to connect to a computer especially if they are more sophisticated. As well, some users who have used mixing desks or standalone recording devices frequently will find themselves at ease with this kind of setup. This is because these devices offer the ability to adjust the sound “on the fly” or mix multiple microphones and audio sources for a polished recording or broadcast.

A cardinal rule to remember is that you will end up having to spend a good amount of money on a good-quality microphone if you are wanting to make good-quality recordings or online broadcasts. No digital processing can make a silk purse out of a sow’s ear when it comes to audio recording.

Here, the USB microphone will come in to its own if you are just using a computer. On the other hand, a good-quality traditional microphone used with a USB audio interface could answer your needs better if you want pure flexibility.