Smart speakers like the Amazon Echo are outselling traditional radios

The traditional radio broadcast industry are finding that the smart speaker as a threat to their business models.

This is because that there are more Amazon Echo, Google Home or similar smart speakers being bought than traditional radio sets. It is in addition to us using smartphones that don’t have traditional broadcast-radio tuners as our “go-to” information and entertainment devices.

Although these smart speakers can, at your voice command, pull up a traditional radio station thanks to TuneIn or similar Internet-radio directories, an increasing number of users are using them to summon podcasts or music playlists through the various podcast and music-on-demand services.

At the moment, traditional radio whether through traditional broadcast technology or Internet streaming is primarily being listened to in the car or at businesses we frequent. It is also being seen, whether for information or entertainment, as a valid casual-listening content-source by Generation X (people born from the late 60s to the early 80s) and prior generations thanks to it being seen that way for a long time. This is due to the ubiquity of increasingly-affordable radio sets in many different form factors along with radio stations making a strong effort to keep listeners tuned to their output.

It is although advertisers and others have seen and are seeing the younger generations as “where the money is”. Here, they end up sponsoring podcasts or playlists to reach that audience with their message in order to stay relevant. 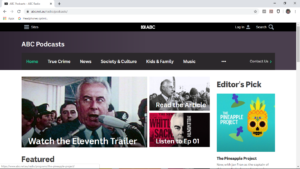 The ABC, like other traditional broadcasters, are offering their own podcasts, whether to do with an existing radio show or not

But what can be or is being done about this? At the moment, traditional radio stations are creating podcasts, whether as a byproduct of an existing radio show or as a new product. Similarly as I have experienced, most radio stations are planting their regular broadcast output on the Internet and making sure this still happens so as to work with smartphones and smart speakers. It is even though they face battles with music rightsholders and sporting leagues about international streaming rights for music or sports content.

RadioDNS “hybrid radio” has surfaced as a way to bring together traditional radio and the Internet. The key method offered by this platform is through a “single-dial” approach that provides a seamless handover between local radio frequencies / DAB multiplex locations and Internet streams for the same radio station. 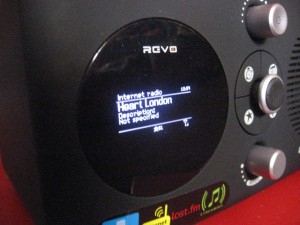 Reliance on Internet audio streams as often done with smart speakers and smartphones can be problemsome if you don’t have the right kind of network and Internet connection. This represents the typical home or small-business network connected behind most home / small-business routers.

You will run in to problems with setting up a smart speaker or similar device to work with a headline public-access / guest-access Wi-Fi network that depends on Web-based authentication or having these devices work with an enterprise-grade network that uses per-device-based authentication approaches. It also includes dealing with mobile broadband services that charge an arm and a leg for continual bandwidth use but services that operate in a highly-competitive market may make this factor easier.

What can be done to bridge these technologies

One approach would be to have an Internet radio that also receives radio content via broadcast technologies work with at least one of the common voice-driven home assistant platforms.

This can be in the form of the radio working alongside a smart speaker based on the common platforms and using RadioDNS to pull up local radio stations under voice control.

An Internet radio can also serve as a speaker for online audio resources like on-demand music services, podcasts and Internet radio especially if the radio doesn’t have network-audio / Internet-radio functionality. The latter concept is being underscored with the Google Assistant platform where you can direct audio from an online-audio service to a device that supports the Google Chromecast protocol. Even if the radio has network-audio / Internet-radio functionality, it could be part of a voice-driven home-assistant platform, which a lot of manufacturers are heading towards and can be of relevance for the “big sets” like hi-fi systems and the network multiroom audio platforms.

A cheaper option could implement RadioDNS across a Bluetooth link with the voice-driven home assistant platform handling the RadioDNS logic. It may require the creation of a Bluetooth profile for sending RadioDNS-specific data between the radio and the smart speaker’s platform i.e. a set-appropriate pointer to the station on the broadcast bands.

It can also be about an Internet-radio / smart-speaker combination device, like the many combination devices available over the years that integrated radio reception and at least one other function. Such a set would have the ability to be an Internet radio but it would have a microphone array and a button to activate Amazon Alexa or Google Assistant, whereupon you would have the full “smart speaker” abilities of an Amazon Echo or Google Home speaker. As well, it would tie in with the RadioDNS functionality to pull up stations on the local wavebands as if you are pulling them up using the assistant’s Internet-radio functionality.

To keep the classic radio medium going, the manufacturers, broadcasters and other stakeholders need to look at whatever technologies can be used to make it relevant in this day and age.

An interesting view on TV’s new direction from the Independent