Acer has now refreshed most of their Intel-powered laptop lineup with Intel’s Tiger Lake silicon and is about to put these new computers on the market. 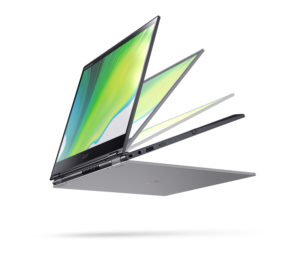 Here, these abovementioned computers come with a Thunderbolt 4 connection which will appeal to the use of external graphics modules, especially “card-cages” that are kitted out with fit-for-purpose graphics cards. That fits in to what I see as an ideal cost-effective graphics configuration that can appeal to students.

The Aspire 5 is available with Intel Tiger Lake silicon but also with NVIDIA GeForce MX450 discrete GPU as an option. But the question that will arise is what relevance will the GeForce MX graphics processor have in the face of Intel’s Xe integrated graphics which has similar, if not slightly better, performance chops.

I would rather that Acer offers an Aspire 5 mainstream clamshell laptop with the Intel Tiger Lake Core i7 CPU, Xe integrated graphics and at least one Thunderbolt 4 port. Here, it would be about something that can do most graphics work including Full-HD gaming but offer an “after-the-fact” upgrade path for better graphics through the use of an external graphics module that has better-performing graphics silicon inside.

But Acer are showing some reasonably-priced laptops that use decent integrated graphics that could appeal to most users who want some performance out of their computer graphics. It could be seen as the way to go when it comes to portable computers that can do what most people want them to do.