Home
Computer Systems
Laptop, Notebook and Netbook Computers
Why do I see Thunderbolt 3 and integrated graphics as a valid option set for laptops?

Increasingly, laptop users want to make sure their computers earn their keep for computing activities that are performed away from their home or office. But they also want the ability to do some computer activities that demand more from these machines like playing advanced games or editing photos and videos.

What is this about?

Integrated graphics infrastructure like the Intel UHD and Iris Plus GPUs allows your laptop computers to run for a long time on their own batteries. It is thanks to the infrastructure using the system RAM to “paint” the images you see on the screen, along with being optimised for low-power mobile use. This is more so if the computer is equipped with a screen resolution of not more than the equivalent of Full HD (1080p) which also doesn’t put much strain on the computer’s battery capacity.

They may be seen as being suitable for day-to-day computing tasks like Web browsing, email or word-processing or lightweight multimedia and gaming activities while on the road. Even some games developers are working on capable playable video games that are optimised to run on integrated graphics infrastructure so you can play them on modest computer equipment or to while away a long journey.

There are some “everyday-use” laptop computers that are equipped with a discrete graphics processor along with the integrated graphics, with the host computer implementing automatic GPU-switching for energy efficiency. Typically the graphics processor doesn’t really offer much for performance-grade computing because it is a modest mobile-grade unit but may provide some “pep” for some games and multimedia tasks. 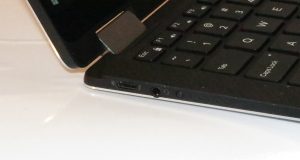 But if your laptop has at least one Thunderbolt 3 USB-C port along with the integrated graphics infrastructure, it will open up another option. Here, you could use an external graphics module, also known as an eGPU unit, to add high-performance dedicated graphics to your computer while you are at home or the office. As well, these devices provide charging power for your laptop which, in most cases, would relegate the laptop’s supplied AC adaptor as an “on-the-road” or secondary charging option.

A use case often cited for this kind of setup is a university student who is studying on campus and wants to use the laptop in the library to do their studies or take notes during classes. They then want to head home, whether it is at student accommodation like a dorm / residence hall on the campus, an apartment or house that is shared by a group of students, or their parents’ home where it is within a short affordable commute from the campus. The use case typifies the idea of the computer being able to support gaming as a rest-and-recreation activity at home after all of what they need to do is done.

Here, the idea is to use the external graphics module with the computer and a large-screen monitor have the graphics power come in to play during a video game. As well, if the external graphics module is portable enough, it may be about connecting the laptop to a large-screen TV installed in a common lounge area at their accommodation on an ad-hoc basis so they benefit from that large screen when playing a game or watching multimedia content.

The advantage in this use case would be to have the computer affordable enough for a student at their current point in life thanks to it not being kitted out with a dedicated graphics processor that may be seen as being hopeless. But the student can save towards an external graphics module of their choice and get that at a later time when they see fit. In some cases, it may be about using a “fit-for-purpose” graphics card like an NVIDIA Quadro with the eGPU if they maintain interest in that architecture or multimedia course.

It also extends to business users and multimedia producers who prefer to use a highly-portable laptop “on the road” but use an external graphics module “at base” for those activities that need extra graphics power. Examples of these include to render video projects or to play a more-demanding game as part of rest and relaxation. 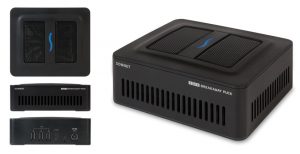 There are a few small external graphics modules that are provided with a soldered-in graphics processor chip. These units, like the Sonnet Breakaway Puck, are small enough to pack in your laptop bag, briefcase or backpack and can be seen as an opportunity to provide “improved graphics performance” when near AC power. There will be some limitations with these devices like a graphics processor that is modest by “desktop gaming rig” or “certified workstation” standards; or having reduced connectivity for extra peripherals. But they will put a bit of “pep” in to your laptop’s graphics performance at least.

Some of these small external graphics modules would have come about as a way to dodge the “crypto gold rush” where traditional desktop-grade graphics cards were very scarce and expensive. This was due to them being used as part of cryptocurrency mining rigs to facilitate the “mining” of Bitcoin or Ethereum during that “gold rush”. The idea behind these external graphics modules was to offer enhanced graphics performance for those of us who wanted to play games or engage in multimedia editing rather than mine Bitcoin.

Who is heading down this path?

At the moment, most computer manufacturers are configuring a significant number of Intel-powered ultraportable computers along these lines i.e. with Intel integrated graphics and at least one Thunderbolt 3 port. A good example of this are the recent iterations of the Dell XPS 13 (purchase here) and some of the Lenovo ThinkPad X1 family like the ThinkPad X1 Carbon.

Of course some of the computer manufacturers are also offering laptop configurations with modest-spec discrete graphics silicon along with the integrated-graphics silicon and a Thunderbolt 3 port. This is typically pitched towards premium 15” computers including some slimline systems but these graphics processors may not put up much when it comes to graphics performance. In this case, they are most likely to be equivalent in performance to a current-spec baseline desktop graphics card.

The Thunderbolt 3 port on these systems would be about using something like a “card-cage” external graphics module with a high-performance desktop-grade graphics card to get more out of your games or advanced applications.

The upcoming USB4 specification is meant to be able to bring Thunderbolt 3 capability to non-Intel silicon thanks to Intel assigning the intellectual property associated with Thunderbolt 3 to the USB Implementers Forum.

What can be done to further legitimise Thunderbolt 3 / USB4 and integrated graphics as a valid laptop configuration?

What needs to happen is that the use case for external graphics modules needs to be demonstrated with USB4 and subsequent technology. As well, this kind of setup needs to appear on AMD-equipped computers as well as devices that use silicon based on ARM microarchitecture, along with Intel-based devices.

Personally, I would like to see the Thunderbolt 3 or USB4 technology being made available to more of the popularly-priced laptops made available to householders and small businesses. It would be with an ideal to allow the computer’s user to upgrade towards better graphics at a later date by purchasing an external graphics module.

This is in addition to a wide range of external graphics modules available for these computers with some capable units being offered at affordable price points. I would also like to see more of the likes of the Lenovo Legion BoostStation “card-cage” external graphics module that have the ability for users to install storage devices like hard disks or solid-state drives in addition to the graphics card. Here, these would please those of us who want extra “offload” storage or a “scratch disk” just for use at their workspace. They would also help people who are moving from the traditional desktop computer to a workspace centred around a laptop.

The validity of a laptop computer being equipped with a Thunderbolt 3 or similar port and an integrated graphics chipset is to be recognised. This is more so where the viability of improving on one of these systems using an external graphics module that has a fit-for-purpose dedicated graphics chipset can be considered.

Acer raises the bar for convertible 2-in-1 laptop performance