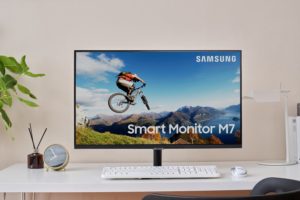 Samsung is launching two computer-monitor models that have Smart TV capabilities. It is similar to the likes of LG offering some computer monitors with integrated broadcast-TV tuners. 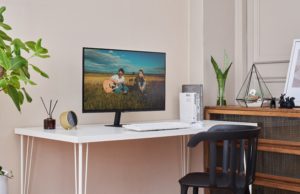 This class of computer monitor addresses use cases where one would put one of these monitors to service not just with their computer for work or advanced gaming but also for ordinary entertainment purposes. The classic examples of this use case include a bedroom or den that serves as one’s office and personal space; or a person who moves in to a small apartment or bungalow where one large room serves as their living room, dining room and office.  It also includes university students who live on campus in a student-accommodation facility like a dorm or residence hall or workers who live in employer-provided accommodation facilities as part of their job.

I did some previous coverage on this topic in an article about having a TV serve as a computer monitor or using a computer monitor as a TV and nowadays some TV manufacturers are offering large-screen TV models that are optimised for computer games with the video electronics equivalent to what is offered in a current-spec gaming monitor. This is due to a realisation that one could be bringing that Windows-based gaming rig or that current-spec games console in to the living room to play games on the big screen TV.

But the Samsung M7 (32” 4K UHD) and M5 (27” or 32” Full HD) monitors have Samsung’s Tizen-OS-based Smart Hub smart-TV platform. These include access to apps for locally-popular video-on-demand entertainment services delivered through that platform. Both sets connect to your home network via Wi-FI 5 technology and they support peripheral connectivity via Bluetooth 4.2 or USB. The Wi-Fi functionality even goes further to work with Wi-Fi-based mirroring technologies and allows the monitor to be part of your DLNA Home Media Network. As well you can stream audio and video from supported Apple devices using the AirPlay 2 protocol.

There is even support for Samsung’s Wireless DeX capability where your Samsung Galaxy S8 or newer Android phone uses the TV as a desktop-style interface. Add to this a virtual-machine which works with Microsoft Office so you can work with Office-based documents stored in the cloud.

The monitors have a remote control so you can manage the smart-TV interface in a “lean-back” manner. This even has the ability to work with the Samsung Bixby voice assistant thanks to a microphone integrated in the remote control. As well, they have two HDMI inputs that support HDR10 and HDMI-CEC. That means you have room to connect your computer and another video peripheral like a set-top box or games console. The M7 model also has USB-C with 65W Power Delivery, Display Port alt connectivity and USB-hub functionality to boot.

A question that will come up is whether the monitors will have an integrated broadcast-TV tuner of any sort. As far as I know, they don’t have that kind of feature although the initial models are being launched in to Canada, the USA and China. But this may be a feature considered of importance for customers in the UK, Europe, Asia, Australia and New Zealand. This is because these countries place significant importance on access to free-to-air TV especially from their national public-service broadcasters.

On the other hand, the DLNA ability that they offer may work hand in glove with broadcast-LAN boxes and PVRs that support this standard. Or Samsung could build SAT>IP client support in to these monitors where they are targeted to British and European markets at least. This is due to this standard being supported for satellite broadcast-LAN devices and, in some cases, terrestrial and cable TV within those markets.

But what I do see of Samsung’s effort with the M7 and M5 monitors is that they are maintaining interest in the market niche where a computer monitor is expected also to serve as a TV for entertainment purposes. This market niche can be further supported through having a wide range of these types of monitors including some game-ready variants and units that can work well with multi-display setups.