Apple’s up-and-coming Apple TV 4K is to capitalise on the idea of using set-top and smart-speaker platforms to provide enhanced stereo sound or home theatre setups that they, Google and Amazon are dabbling in.

As well, there have been approaches towards having various video peripherals offer their own audio output abilities usually for their own sources along with soundbars and the like implementing HDMI-ARC to play TV audio through their own speakers, In some cases, some of the soundbars that are part of network multiroom speaker platforms have the ability to stream sound from the TV to one or more remote speakers. 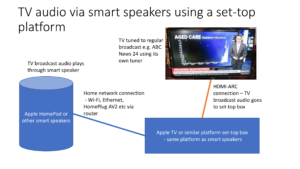 The next direction for set-top-box and smart speaker platforms

But Apple is bridging their Apple-TV/AirPlay/HomePod set-top and smart-speaker platform with HDMI-ARC technology including the eARC revision to do more. This time, it is to allow a user to stream audio from the TV’s own sources such as the broadcast-TV tuner to Apple HomePod speakers. This can be about remotely listening to a sports call or 24-hour TV news channel via a HomePod speeaker or using a pair of HomePod speakers to have better stereo separation for your favourite TV shows.

At the moment, this is intended to work with the original HomePod speakers rather than the HomePod Mini, with this causing confusion in the press as Apple is discontinuing the original HomePod speakers. The question that will come up is whether this kind of setup will apply to other AirPlay-compatible devices connected to your Apple TV 4K set-top box, including an AirPlay-based multiroom setup which your Apple TV device is part of.

This could have Amazon and Google looking towards ARC / eARC support for their set-top devices with the idea of playing TV audio via their Echo or Home / Assistant smart-speaker products.

As I mentioned in my article about video peripherals offering audio-output abilities, there will be the issue of using HDMI-ARC and HDMI-eARC more for delivering TV audio to these devices and how that can be improved upon. For example, I would see a requirement for an “any-HDMI-socket” approach to ARC/eARC connection rather than connecting the ARC-capable audio peripheral to one particular HDMI socket. Similarly, a TV may have to support streaming TV-show sound to multiple HDMI-ARC ports concurrently as well as passing PCM or bitstream audio streams representing surround sound to multiple HDMI-ARC ports.

But I am surprised that Apple supports HDMI-ARC with their Apple TV 4K device and HomePod smart speaker setup which would facilitate access to traditional broadcast TV via their equipment. That may be considered “out of touch” by some of the trendy Apple fanbois who aren’t necessarily in to the traditional way of consuming TV content. But I do see this as a significant trend in bringing traditional TV to smart-speaker platforms especially where a company owns a set-top media player platform and a smart-speaker platform.