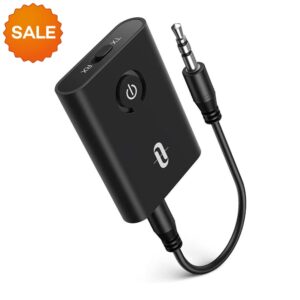 Another highly-portable Bluetooth audio adaptor worth mentioning is the TaoTronic Bluetooth Transmitter for TV. This device sells for USD$21.99 in the USA direct from TaoTronics through the product link above but Kogan are selling this in Australia for AUD$55.00 with tax and shipping included to Australia. 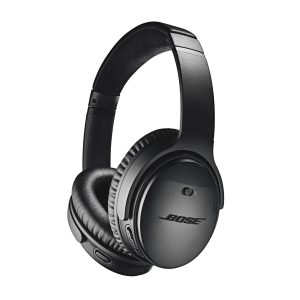 Like the Twelve South AirFly that I covered previously, this battery-operated device can stream audio content from a headphone jack that it is plugged in to to a pair of Bluetooth headphones. The obviously comes in to its own when using your Bluetooth headphones on the plane to watch a movie via the in-flight entertainment setup; working out at a fitness centre which implements an audio distribution setup for TV sound or workout music fed to headphones; or watching TV late at night with the sound via headphones.

But you can use other connection devices like longer or better cables to achieve the same goal in a better way. You could even plug a cassette adaptor in to this TaoTronics adaptor and effectively stream your smartphone’s multimedia audio through that cassette player installed in your 1970s-1990s classic car. As well, for newer cars, this would be about using the car stereo’s AUX input to stream multimedia audio from your phone to the car stereo even if the Bluetooth setup is only about communications audio.

This is powered by a battery that is quoted to have a 10-hour battery runtime or via a USB power source fitted with a USB micro-B plug. Product pictures even illustrate you powering the device from one of the USB sockets on your TV that will typically be used for a Wi-Fi adaptor to to play video from a USB memory key. You can even have the device’s battery charging while you are using it to transmit sound to your headphones or play a Bluetooth audio stream through your favourite audio system.

It is user-friendly in the context that you don’t have to perform a special rigmarole with the pairing button to switch between transmit or receive modes. Rather you just flick a mode switch between “transmit” and “receive” modes. There is still a button to instigate device pairing where necessary.

The size of this device is smaller than the typical smartphone which, along with battery / USB operation, incentivises you to take it on the road more frequently. A good travel scenario that may come about is to use the adaptor with your Sony WH-1000XM4 or Bose QuietComfort 35 Bluetooth active-noise-cancelling headphones to hear a movie on the inflight entertainment system during the flight. Then, when you are at the hotel, you plug this device in to the “audio input” jack on your hotel room’s TV to play Spotify music through that TV’s speakers. 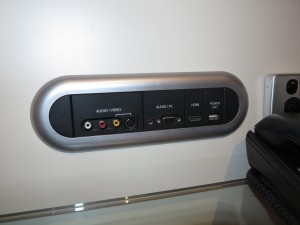 The TaoTronics Bluetooth transmit-receive adaptor can even work well with your hotel-room TV if it has an AV connection panel like this with a 3.5mm stereo mini phone jack for audio input

The TaoTronics Bluetooth audio transmit-receive adaptor supports Qualcomm aptX operation but only for one device at a time. Otherwise, it can stream audio to two headsets which can come in handy where two people are listening to the same audio source like a TV programme. It also works according to the latest Bluetooth 5.0 standard thus allowing for increased audio stability and battery efficiency along with the ability to run two headsets.

TaoTronics could have a variant of this device that works in a “communications and multimedia” mode like the Sony SBH-52 headphone adaptor that I used previously. This could earn its keep with wired headphones or automotive setups where you need to have full-on handsfree communication and audio playback with the same device.

But this is an example of a highly-compact easy-to-use device that can be about either streaming audio from your phone via Bluetooth to an existing sound system or using your favourite Bluetooth headphones to hear TV sound in private.