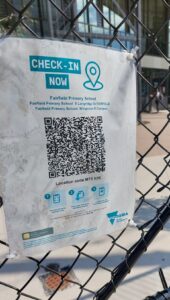 A situation that happened with my Android phone recently was that the Services Victoria QR code app failed to recognise a check-in QR code even though it has normally been doing that before. I had to then resort to entering the venue-specific manual-entry code printed below the QR code on the signage to begin the check-in process for that area.

This problem can also happen with something like WhatsApp, Signal or something similar when you are attempting to bind a desktop or other secondary client device to your service’s account. This also extends to Wi-Fi Easy Connect setups that allow you to enrol your phone or another device in to a desired Wi-Fi network.

It can also happen with book+app setups used with interactive books, second-screen apps that are part of interactive-TV setups, or some app-driven coupon systems that are dependent on recognising QR codes for their functionality. Even setting up app-based multi-factor or password-free authentication is dependent on QR codes when you are provisioning that mobile-based authentication app with an online service.

In use cases like WhatsApp, there may not be any alternative like a human-readable code or an NFC tag to use as an alternative to scanning a QR code. This would then make the app or function useless for its intended purposes.

The situation described here is that a QR-code-dependent app that was previously recognising QR codes for that associated system fails to recognise them.

But how did I troubleshoot this problem further?

A lot of these apps that have QR-code scanning functionality are dependent on functionality within iOS or Android that works with the camera to recognise these codes and make them useful for software on your phone. This is to avoid the need for the software developer to reinvent the wheel when it comes to adding this functionality to their apps. 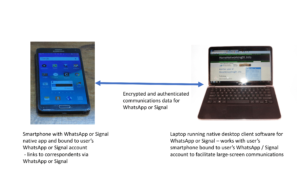 .. as can setting up Signal or Whatsapp to work with your regular computer or iPad

But if this fails, the apps that depend on this functionality don’t perform as expected when you attempt to scan a QR code with them. This is even though they have enabled the camera and are passing through the vision to the app’s “viewfinder” window. Of course you might think that the rear camera’s lens is dirty or scratched or you are attempting to scan a poor-quality reproduction of the code.

One way to troubleshoot this kind of situation is to scan this kind of code with a dedicated QR-code scan app that is part of your phone’s operating system. Most Android users would have this as part of the Quick Settings menu. Here, this app has the camera behave in a manner optimised for scanning barcodes and QR codes as if it is called upon by one of these QR-dependent apps.

On some platforms, the Camera app’s QR-code recognition function may behave differently due to it using different in-app software from what is part of your phone’s operating system. This is due to the camera software working on a “photography first” approach rather than a “barcode scanning first” approach.

If this app fails to recognise any QR code, you are dealing with a situation where the software processes associated with QR-code recognition crashing or hanging. This situation may happen with other software on your phone underperforming or behaving in an abnormal manner. Here, you may find that it is a good idea to fully restart your phone, which will effectively get everything to a known point.

In this case, you would have to shut down then restart your phone so as to cause it to fully restart. You should see your phone’s manufacturer or operating system logo appear on the screen as part of the restart process.

After the phone is restarted completely, attempt to scan any QR code with the above-mentioned dedicated QR-code scan app that is part of your phone’s operating system. Usually that will succeed after you have restarted your phone due to the necessary software processes being restarted.

You may have also had to deal with a software update for the QR-code recognition software as part of a software-quality or security update for your phone’s operating system. It is typically to rectify any bugs or security exploits in the affected software or simply to “tune up” the software for better performance.

If that succeeds, attempt to scan the QR code using the app you had problems with so you can identify whether that app is at fault or not. It is also a good idea to check for new versions of this app by visiting your mobile platform’s app store and checking for software updates.

The need for a software update for that app may be due to the app’s developers re-engineering it to take advantage of newer QR-code-recognition software libraries, and may also have to apply for any QR-code-dependent apps on your phone. It is although the revised software libraries are most likely written to support “legacy” application software but offer a “new way in” for newer apps.

In the case of your jurisdiction’s contact-tracing check-in app, you may have to do a Google image search for QR codes relating to that platform. Here, some of these images will represent a sharp-enough representation of a “production” QR code at a known place. Or a club or similar organisation may have set up and posted a “test” or “set-up” code to help members with the onboarding process for the contact-tracing check-in platform.

Your phone not working properly with QR codes may not be just a camera or lens problem but software associated with this functionality that simply had stalled or crashed. Here, you may find that you simply restart your phone to gain full functionality.