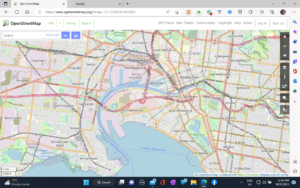 OpenStreetMap seen as a viable alternative to Google Maps

Major tech firms like Microsoft, Meta (Facebook, Instagram), TomTom, Amazon Web Services and the Linux Foundation to build an open-source mapping and geolocation project to compete with Google Maps. It is to complement OpenStreetMap as a major competing navigation and geospatial data pool.

As well, they are pulling in data from public sources like government urban-planning departments to create the “shape” of cities and towns. Here, this allows for factoring in new property developments that are given the green light along with government-planned urban-renewal and similar projects. It could also encompass government roads departments who are laying down new roads or upgrading existing roads for new needs.

The idea is to support true interoperability when it comes to information about places and areas. Here, it is about using data from a plurality of data sources which leads to better data quality and richer data.

An issue that I would see coming about is whether the Overture Maps Foundation project and OpenStreetMap will present this effort as a consumer-facing mobile platform app or desktop program pitched for general use like HEREWeGo Maps. Or whether it could be focused towards various third-party Websites and software that exploits this data such as e-government, vehicle-dispatch, hotel-booking or similar use cases.

But one area this could affect is your vehicle’s integrated GPS sat-nav feature, especially if a vehicle is intended to be positioned for the so-called “value-price” market. The combination of the Overture Project and OpenStreetMap could be about providing a line-fit sat-nav setup at a price that is affordable to the manufacturer. It could also be about automotive infotainment equipment sold as an aftermarket add-on that has sat-nav functionality where such equipment is to be sold at a price affordable for most people.

Similarly, there will be issues like assuring support for and access to real-time data such as weather, traffic and transit, or emergency-situation information. This could be facilitated through open-frame database APIs associated with weather services and the like who maintain this kind of data, something that could be pushed by the public service achieving the “open source” attitude.