Use these resources together if you are working both Windows systems and the Apple Macintosh. 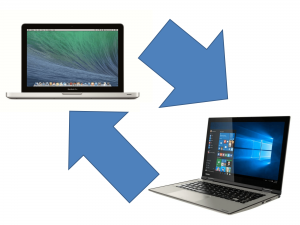 Microsoft’s article is focused on their new Surface Book but the instructions apply more or less to anyone who is moving from MacOS X to Windows 10 or a Mac user who is wanting to be familiar with the new Windows 10 operating system or know how it works.

Apple does provide similar resources for people who are used to the Windows platform moving towards the Macintosh platform ever since people moved from Windows because of Windows Vista.

Most of the basic keyboard shortcuts are:

The Command key on the Macintosh is the one with a snowflake and / or Apple symbol on it.

The “Mission Control” key will be the F3 key on recent equipment or F11 on older equipment.

The Windows key on Windows computers has a window icon and / or the Start word on it.