I am now reviewing the Canon PIXMA MX-350, which is Canon’s mid-tier network multifunction printer. This is the first printer or multifunction device that I have reviewed on this site that is from another “stable” and it would be interesting to see how it compares with any of the equipment that I have reviewed previously. It can work with Bluetooth mobile phones if you purchase an optional Canon Bluetooth connectivity kit. 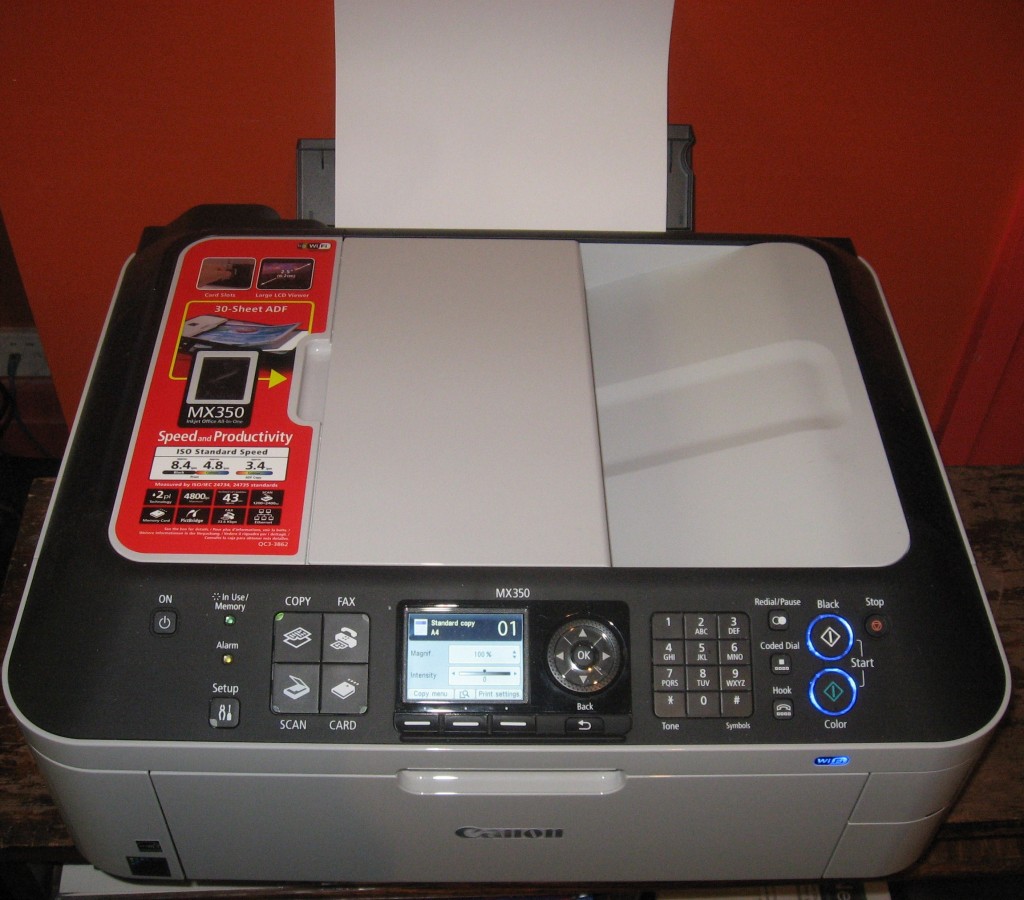 The printer has a styling that can look very confusing especially when you see the press photos or see the unit at the shop that you buy it at. It has a large body with a door on the front which is the document output tray. This can be opened manually or the printer drops this open when it starts printing. The top of the unit has a bay which you may think documents for scanning, copying or faxing but this area is where the documents are ejected from after they pass through the automatic document feeder. When you load the automatic document feeder, you have to open the flap in the middle of the top of the unit. 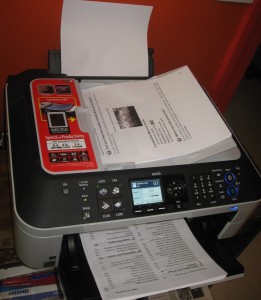 Don’t think that if you lift up under the control panel, you will get to the inside of the printer as if to replace the ink cartridges. Here, you expose the scanner’s glass surface where you would put bound documents to be scanned. When you change the ink cartridges, you have to open the document tray manually then reach in further to lift the lid for the print mechanism. Here, this printer requires you to pull out a stay to keep the lid open when you change the cartridges.

I have set this unit up with the Wi-Fi network and had found that when you enter the WPA-PSK key, you have to use a mixture of “SMS-style” and “pick-n-select” text entry methods. It can also support “push-to-connect” WPS routers which should make the connection experience much easier. It can also be connected to an Ethernet network if you value the reliability of a wired (Ethernet or HomePlug) network setup or it is located near the router.

As far as the Wi-Fi network is concerned, it is responsive to print or scan jobs sent over the Wi-Fi network even if the machine had gone to a low-power mode after a period of inactivity. This is unlike some HP Wi-Fi printers that I have reviewed which require you to fully power them up at their control panel so they announce their presence on a Wi-Fi network if they have been in low-power for a while.

You still have network access to printing, scanning and faxing functions, with the last one being in the form of a “print-to-fax” function from other network computers. 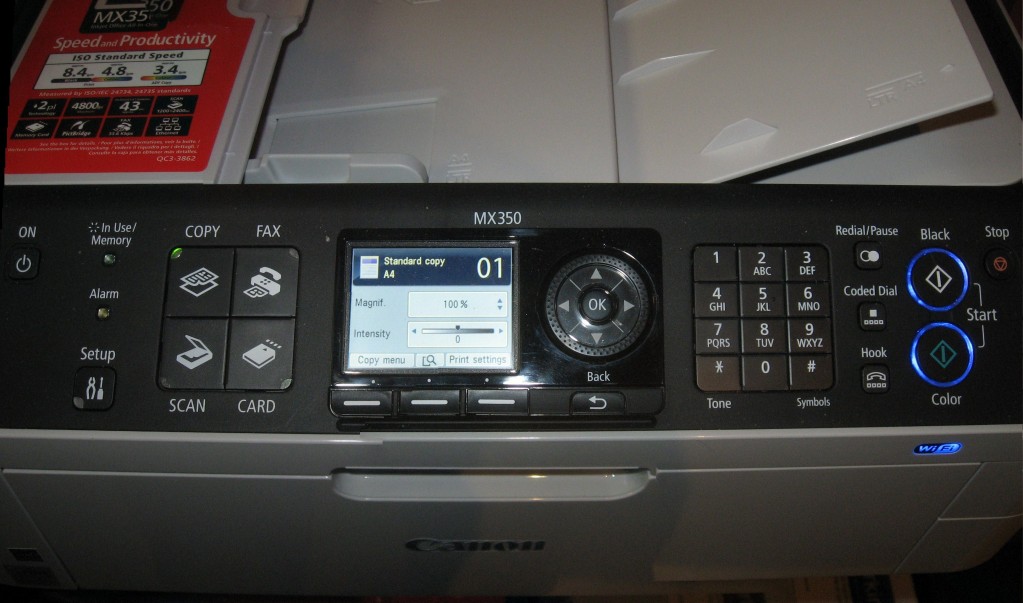 Like most printers of this class, the “walk-up” scanning, faxing, copying and “print photos” are a button away. As well, the controls are laid out in a logical manner and the unit uses a bright display to help with job-specific configuration.

The menus on the control panel can be very trying to use especially if you use the wrong paper for a particular job. If the unit highlights an error with the paper type that you select for a particular job, it should then “move” you to the option concerning the paper that you select so you have the opportunity to change that option rather than throwing up the error message.

The unit supports network-based as well as walk-up faxing for both colour and monochrome jobs but it doesn’t have functions that may be valuable for fax users. It supports user-defined “receive-to-memory” for noise-free operation at night or confidential document reception, but doesn’t support scheduled document transmission in any way.

This printer supports a walk-up “template-print” function that works in a similar manner to the “Quick Forms” function on the HP Photosmart Premium Fax and other high-end HP consumer printers, where the printer can turn out pre-ruled stationery like graph paper, notebook paper or music manuscript paper. But this one has an improvement that will please the music composers and arrangers amongst us. Here, there is an option to print portrait-style manuscript sheets that have 12 staves rather than 10 which is important for work like “vocal + piano”, quartets or organ music.

The function could be improved on this machine with support for “landscape-oriented” options for some of the stationery like music paper. This function is available only through the unit’s Setup menu as “Template Print” rather than a dedicated button.

I have run some large copy and print jobs through this printer and it is reliable enough to handle them. The ADF could handle a 20-sheet scan / copy / fax job properly and the printer can run the large jobs properly although you may have to remove the sheets from the output tray after every 50 or so sheets are printed.

One main limitation that I have found with this printer is that it uses a single colour ink cartridge rather than separate cartridges for each of the colours. This is a glaring omission because most of the equivalent models that are provided by the competing manufacturers have separate cartridges for each of the colours and would place this model at a disadvantage. The PIXMA MX-870, which has duplex printing, has support for the separate colours and this issue affects how expensive it is to run the printer. If the separate ink cartridge was to be kept as a product differentiator, Canon could provide an aftermarket option kit where the printer could be upgraded by the consumer to work with separate inks at a later date.

Another limitation that I would like to see rectified would be that the printer lid is held open with a stay that the user doesn’t need to handle, whether to open or close.

If this printer used separate ink cartridges for each of the colours, it could stand a chance of being a serious competitor to the HP Photosmart mid-range network-enabled printers and earn itself a rightful place as a multifunction printer option for home-office or small-business use.