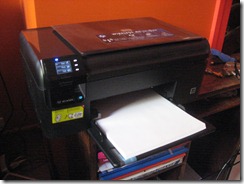 The Photosmart Wireless is a piano-black machine with a very small LCD mounted at an angle on the left of the unit. The display has touch-buttons that light up in a “pinball-machine” fashion to provide an operation experience similar to most automatic-teller machines. This is with buttons placed on the edge of the screen and whatever the button does is indicated on the display screen. 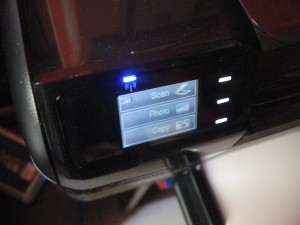 The setup experience is typical for many consumer multifunction printers, where you have to install drivers from a CD-ROM supplied with the printer. You can download the software from HP’s website if you want to make sure the printer works with the latest drivers for your operating system, and will have to do so for Windows 7 systems.

This printer has been improved as far as access to its interior is concerned. When you open it up to load ink cartridges, you don’t need to operate any catch to release the lid. As well, the lid stays open and wide without the need to work with any stays or levers to prop it up, which is also of benefit for people who are short-sighted

There is no need to apply any extra pressure to remove or install any of the ink cartridges, which I consider important for older people or people who have arthritis or similar limitations. 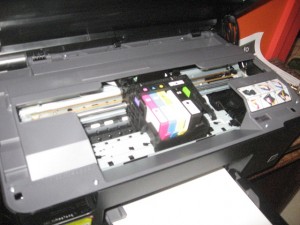 4 ink cartridges that are easy to load

This printer uses one cartridge per colour, which allows you to replace the colours that you need to replace when they run out. This is compared to an inefficient practice older colour inkjet printers where you replace a “colour” cartridge if any of the colours run out. It can work with a standard cartridge or, a large-capacity cartridge which is available at a slight price premium over; and you can choose to run with either of these types for each of the colours. 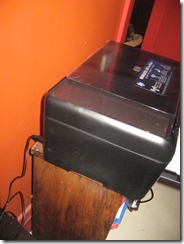 Only cable connected to printer is the power cable

There is the ability for this printer to support “push-button” or “PIN-number” setup from its control panel if you have a WPS-enabled Wi-Fi network. On the other hand, you have to connect it to a host PC and run the software on the CD-ROM to set it up to work with a Wi-Fi network.

The printer doesn’t have an Ethernet port, so that puts other network technologies like regular Ethernet or HomePlug powerline out of the picture. This may not be an issue with typical wooden or brick-veneer suburban homes where you can receive Wi-Fi everywhere from one router, but can be an issue with older double-brick homes or larger homes.

As far as network functionality is concerned, you can print or scan via the network. There isn’t a “wake-up” arrangement which allows you to bring the printer out of low-power mode from any network-connected computer. Therefore you have to make sure that the printer is fully on when you want to start printing or scanning.

There were no major hassles involved with printing documents, which it was able to do very quickly. I even ran a “pressure-test” print of one of the HP manuals for this unit from HP’s website to see how it can handle a large printing job like a school assignment or large report. It was able to allow 30 pages to “pile up” on the paper tray without causing reliability problems. As well, I was able to replenish the paper supply and continue printing by using the unit’s controls and without having to go back to the host computer when it ran out of paper.

This reliability has been provided for because Hewlett-Packard had stuck to the same kind of inkjet printing mechanism for their desktop inkjet printers ever since they released the original Deskjet in 1988.

For photographic work, the unit worked well with keeping the colour balance and flesh tones right. Infact it didn’t “over-saturate” pictures even when a person who was in the picture had a reddish complexion. It still took its time to print the photographic images because of the requirements of that job.

It can also print from camera cards including SDHC camera cards, and can print DPOF print orders that you set using your camera’s user interface. It still has the usual limitations of requiring the card to stay in the slot during printing, which can be a limitation when you want to grab more “moments” while the unit is printing your pictures.

The printer can scan documents and images, whether direct-connected or network-connected. If you want to start the scanning job from the printer’s control panel, you will need to make sure that you select the desired computer to send the job to. This is determined by whichever computers have the HP software installed on them.

I have scanned some 35mm prints using this machine, including some pictures of people and the printer’s scanner was able to reproduce the pictures properly. This included a picture that I took with people who had different complexions and this kind of scenario could be a trial for some scanners.

The Photosmart Wireless printer took around 15 seconds to copy an A4 page, no matter whether the unit was to make a colour or monochrome copy of that page. This would still make the printer suitable as a convenience copier for most households.

This printer is finished in that “gloss piano black” look that makes it appeal to home use. This would be more of an advantage with rooms where the furniture is primarily a “dark wood” finish or a finish similar to that lacquered-black grand piano. The only disadvantage with this finish is that it attracts fingermarks too quickly.

There is still that sense of sturdiness that is common with good-quality printers with everything snapping in to place in an assured manner.

It is easy to perform routine maintenance tasks on this printer like replacing ink cartridges because there isn’t much effort required to open the lid or remove and install the cartridges. As I have said before, this is important for those with weaker hands like older people.

The printer is very quick at most of the routine tasks that you would expect it to do. It also has the hallmarks of Hewlett-Packard’s build quality and reliability that they have been known for.

The software isn’t likely to get in the way of your computing tasks or place unnecessary burdens on your computer’s performance. Infact, the only way it makes its presence felt is to inform you of your print-job status or to accept scanned documents or images if you start the scan from the printer’s control panel.

One main limitation is that you have to connect the unit to a computer running supplied software via USB for it to work with Wi-Fi network segments that don’t use WPS configuration. It cannot be used with wireless networks that use WPA-Enterprise security, nor does it have an Ethernet socket for use with other networking technologies. These particular limitations are most likely to be typical of a low-end Wi-Fi-enabled consumer multifunction printer.

There isn’t a USB host socket, which rules out the use of the printer for PictBridge printing or printing from USB memory keys. As well, the small display screen may be a hindrance for some people, especially those who have eyesight limitations.

Now that the cost of secondary-storage flash memory is becoming very cheap, manufacturers like Hewlett-Packard could install an extra SDHC card slot or low-capacity flash memory in these printers and use it as a low-capacity “hard disk”. This could permit print-job buffering for memory-card or network print jobs, CD-free setup for USB or network installations and improved network-scanning workflow.

I would recommend buying this printer as an entry-level Wi-Fi network all-in-one printer, especially if you are moving your computing lifestyle towards the “new computing environment”. This is based around a laptop that connects wirelessly to the Internet via a wireless router and is likely to be used around the house. It would also work well as a secondary Wi-Fi network printer for the home such as one that would be placed in the family room while you have the more-expensive unit placed in the study or home office; or as a Wi-Fi network printer for use at a secondary home location like a holiday house or city flat.

For small-business use, this printer could work well as an “away-from-office” multi-purpose printer/scanner where there are occasional small print runs or the need to do “quick copies”. The network ability would only support Wi-Fi network setups that don’t use enterprise-level authentication. This would mean that it can work properly with the typical 3G routers that “edge” temporary networks.