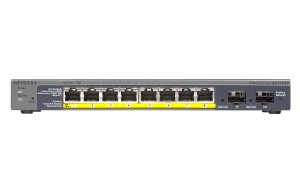 The concept of VLANs and quality-of-service functionality is now become increasingly relevant to the home and small-business network now that the “single-pipe triple-play” and “next-generation” broadband Internet services are either here in your market or are coming around the corner to your market.

The VLAN is a separate logical network path within a physical network medium, such as multiple SSIDs from one Wi-Fi access point serving different networks or a HomePlug setup with multiple Network Passwords for different networks. Most business-grade Ethernet switches offer this functionality in order to have particular Ethernet sockets associated with particular logical networks. It is used in many network applications such as interlinking a business with multiple premises through one multi-tenant building or providing Internet-only “guest access” service to business networks.

Now the VLAN is becoming common in small networks as part of either providing “guest access” or “hotspot service” to the Internet without encroaching on the security of the resident network; or providing dedicated “fast-lanes” for quality of service when it comes to A/V streaming or VoIP service.

NETGEAR’s role in this equation

Now NETGEAR have provided the GS110TP Gigabit Power-Over-Ethernet Smart Switch which is an 8-port switch which offers this functionality and Power-Over-Ethernet to all the ports for US$260. This is similar to how this company offered 5-port and 8-port 10/100Mbps Cat5 Ethernet hubs and switches at prices affordable for most people when the idea of home networking and broadband Internet came on the horizon in the early 2000s. Then a few years later, they offered 8-port 10/100Mbps switches with that had 802.3af standards-based Power-Over-Ethernet supply functionality on four of the ports, again at a price that most users can afford.

It may be easy to think of this unit being a candidate “central” switch when you wire your premises for Ethernet and want to make it future-proof for these new requirements. There have been some concessions to allow it to work properly with “triple-play” by the use of a default VLAN matrix with one VLAN for regular traffic, one for VoIP and one for video traffic. There is some “automatic-transmission” logic that shifts data to the different VLANs based on whether the data was primarily multicast in the case of video or one of a few VoIP protocols in the case of VoIP.

The main problem with this is that this switch wouldn’t work in a “plug-and-play” manner with “edge” devices that use certain VLAN setups or QoS methods to assure video and VoIP quality-of-service. For example, most of the “n-boxes” (Livebox, Neufbox, Freebox, Bbox, etc) used by French “triple-play” service providers as network-Internet edges have one Ethernet port for video traffic and three Ethernet ports for regular traffic. These units would expect you to connect the IPTV box to the “video” Ethernet port and you may end up with QoS or installation difficulties if you used this switch with them.

Limitations with this class of switch

This may also include the flexible installation and “at-will” relocation of devices like VoIP handsets or IPTV devices as well as the support for multiple devices of this type across an Ethernet backbone. It also includes the support of multiple cascaded switches such as “regional” switches in other parts of the building or other buildings.

Other benefits to take note of

One bonus that I like about this switch is that it has offered 802.3af-compliant Power-Over-Ethernet across all Ethernet ports which allows the Ethernet cable to be a power cable as well as a data cable.This technology, which I will cover in a separate article on this site, has been pitched at business networks as being suitable for powering Wi-Fi access points, VoIP telephone handsets and IP-based surveillance cameras with one cable and from one point. Infact, NETGEAR have released an 8-port “regional” smart switch that has similar QoS and VLAN functionality but can be powered from this switch or other standards-based Power-Over-Ethernet networks.

Another feature that also appealed to me about this switch is that a unit of this price was equipped with optical-fibre LAN connectivity which can reduce the cost of using optical-fibre as a high-reliability long-distance link between buildings, especially on large properties.

This is another example of NETGEAR offering technology that is deemed “large business” at prices that home users and small business can afford.