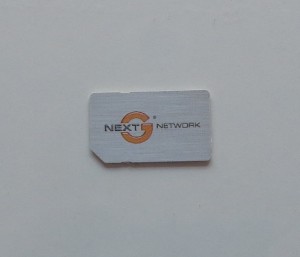 If a company or person wanted to have highly-secure data or voice communications on their smartphone or tablet, they had to install an “over-the-top” software package and establish a separate password or key for the secure path..

Now Vodafone Germany, who is part of the Vodafone mobile-telephony conglomerate, have worked on a SIM-based setup that they can easily provide as part of a value-added service. This is based around all the passwords and keys being part of the SIM card and software held on the handset making use of these keys along with native apps to provide the secure tunnel.At the moment, this is offered to larger corporate and government customers but could be offered to small business accounts especially as some of these businesses also provide goods and services to the large corporate and government user base

One reason I would suspect that Vodafone have worked on this concept is to provide an easy-to-deploy end-to-end encryption service for consumers and small business in the wake of the Snowden affair. At the moment, the setups would be designed to work with Android devices but with Blackberry and Windows Phone ports being considered. In the case of Windows Phone, this could allow for the concept to be taken further to Windows-based tablets, laptops and desktops which are used for a lot of business computing.

A limitation that I see with the SIM-based solution is that it is dependent on a device having an integrated 3G or 4G modem thus wouldn’t be considered truly “transport independent”. I see this as being of importance as people use Wi-Fi hotspots provided by many different venue hosts and not many of these are kept secure by the venue owners thus making the customers’ data vulnerable. Similarly, this will also be of concern for client-to-box VPN setups where the “other end” of the VPN tunnel connects to the Internet via a fixed WAN connection like cable, DSL or fibre-optic.

This could be a step for mobile carriers and telcos to provide the encryption needed for secure communications especially in the wake of some serious spying scandals.

Carry an instant Windows 7 hotspot in your pocket | NetworkWorld.com Community

My comments on this device

I have come across most of the small wireless-broadhand Wi-Fi routers and most of them seem to offer the same functionality – working just as a wireless router for wireless-broadband services. But the Vodafone Mobile Wi-Fi R201 has offered more than the typical device of its class.

This battery-operated device has a built-in microSD card and is able to work as a network-attached storage device as well as a router for wireless broadband. It can present the files via three different protocols – SMB/CIFS, HTTP or UPnP AV / DLNA for media files. The latter function is provided for by TwonkyMedia Server which is being integrated in to many network-attached storage devices.

It can be powered from AC power, USB or integrated rechargeable batteries but, due to its small size, it doesn’t have an Ethernet connector for either LAN or WAN (broadband) connectivity. An Ethernet connector being added to the device could allow the unit to become a NAS / wireless access point for an existing network or it could work with a cable or ADSL modem as a router. As well, it is dependent on the Wi-Fi network as the primary connection method.

The unit can work tightly with Windows 7 or with other operating systems and devices that support WPS, especially the PBC “push-to-connect” method. As well, the PSK passphrase for the WPA2 security setup and the SSID are unique to each unit, which makes for better security.

Another feature is that this particular “Mi-Fi” can work alongside the network-connected computers as an SMS send/receive terminal. This is done using a Web form that is part of the Web management interface for this device.

My comments about this device is that it would work hand in glove with a portable Internet radio like the Pure Evoke Flow that I previously reviewed as long as you have a generous data plan on the SIM card for receiving Internet-radio programs. This is intensified by you putting a microSD card full of music or a SlotMusic card (the microSD equivalent of the pre-recorded Musicassette) in this device and using the radio’s DLNA music-player mode to play the music files from the card.

As well, I would recommend that users who buy this device buy a USB car charger that plugs in to the vehicle’s cigar lighter in order to avoid compromising the device’s battery life when they use it in the car. This charger should have a standard USB socket on itself or a microUSB plug that fits the device.

By the way, it is worth noting that this router is now available in the UK and will be rolled out to countries that Vodafone does business in as a name.