You love the sound of overseas radio stations or are fed up with what is playing on the local radio bands, and want to hear something different. You have then dabbled in Internet radio, usually through clicking on “Listen Here” links on radio station sites or using programs and Internet-radio directories like vTuner. You then realise that it would be better to hear this content through a standalone Internet radio rather than moving your laptop computer around and hearing the content through tinny speakers or being tied to your desktop computer.

There used to be a few Internet radios on the market but the number is slowly increasing, with nearly every premium-radio brand or boutique electronics brand running at least one model in at least a tabletop or portable form factor. The units can also pick up podcasts and support “listen-again” functionality for podcasts and similar content. Nearly all of the Internet radios on the market will have a built-in tuner for at least FM and/or DAB digital radio; and, save for a few cheap units, they are capable of playing music held on a computer or network-attached storage device via the home network using at least the UPnP AV (DLNA) protocol.

Not many mass-market home-appliance and consumer-electronics chain stores stock Internet radios at the moment because most of these chains perceive that “Average Joe Six-Pack” won’t understand these radios. This is more so in Australia because of it being a smaller market than the UK or USA. You may be lucky to buy a set from the electrical / consumer electronics department of one of the established department stores like Myer, David Jones, Macys, Selfridges or Marks & Spencers; or some supermarket chains like Aldi.

The best bet for finding Internet radios would be to go to an independent audio-video or electronics dealer like SoundStream or Radio Parts Group. Alternatively you could shop online through a place like Amazon or one of the catalogue-driven direct-marketing outlets like Sharper Image, Hammacher Schlemmer or Innovations. There are some manufacturers and distributors like Kogan who supply Internet radios and other equipment through their own direct-sales channels.

What do you need to know 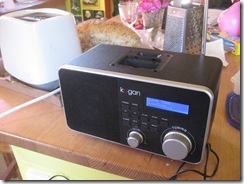 This is the most common type of Internet radio, where the set is similar to a clock radio or classic mantel / table radio. These units are designed to run only on AC power and have one or two integrated speakers.

The reason Internet radios have appeared more in this class of set is because there is a renewed interest in this type of radio in the premium radio sector.

Most of these units have a line-level input jack so one can play a portable CD player or MP3 player through the radio’s speakers as well, in some cases, a line-level output to connect the radio to a recording device like a MiniDisc deck; or an external amplifier. Some units will have an integrated CD player, integrated iPod dock and / or USB socket to play music from a USB storage device.

The more expensive units like the Pure Avanti Flow, the Sangean WFR-1 Series or the Denon S-52 illustrated above have a sound quality that is very similar to one of the large high-end “ghetto-blasters” of the early 80s and can be an alternative to a regular bookshelf music system for a small apartment like a studio apartment or a college dorm room. 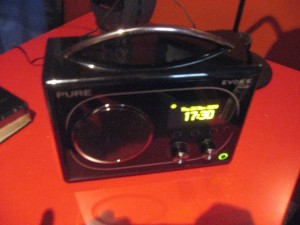 There is an increasing number of portable sets that are the same size as the typical portable radio of the kind with the large handle that sits on many kitchen benches and window sills. Most of these sets have a single speaker and will have a line-level input at least. A few of them can work on integrated batteries, either as a set of D-size cells or a rechargeable battery pack that is charged when the set is plugged in to AC power.

These units will typically have a sound quality reminiscent of the typical large portable radio or 1970s-era mono radio-cassette.

These units don’t have built-in amplifiers or speakers and are designed to be connected to an existing music system via its line-level inputs or, in some cases, digital inputs. Some of these units may have a built-in DAB or FM tuner and can easily work as a replacement to an existing AM/FM tuner.

Some manufacturers may market these units as network music players because of their ability to play music held anywhere on the home network through the hi-fi system.

Some tabletop music systems or home-theatre receivers, most notably models at the top-end of most manufacturers’ ranges, have Internet radio and network media playback as an extra “source” or “function”. This is usually to add extra value to these units, especially at this end of the market.

Some manufacturers may also integrate Internet-radio function in to “music-server” or “music jukebox” components. These are components which have an integrated hard disk where music “ripped” from CDs played in an integrated CD player or recorded from line-level inputs is held and can be played through the connected amplifier or, in some cases, provided over the network.

The tabletop and portable units and some Internet-radio tuners will typically have integrated 802.11g WiFi connectivity to a home network’s wireless segment. This connectivity will work properly with wireless networks that use standard WEP, WPA-PSK or WPA2-Personal methods for their security, and usually require the passphrase or WEP key to be entered using a “pick’n’select” method. They also work well if the network has a visible SSID and most of them won’t support WPS or Windows Connect Now “quick-setup” routines or WiFi networks secured to corporate methods. As well, these sets won’t self-connect to hotspots that use common “browser-based” authentication setups.

Some of the tabletop and portable radios and all of the Internet-radio tuners and music systems / home-theatre receivers have a regular Ethernet jack for connection. This connection also works well with HomePlug powerline segments if you connect a HomePlug-Ethernet bridge appropriate to the class of HomePlug segment that you are operating to the Ethernet jack on the set.

These sets, which are based on one of four platforms (RadioTime, Reciva, Frontier or vTuner), typically work with an integrated directory of Internet streams and podcasts that is able to be updated over the Internet. This can be done automatically or manually with the user pressing an “update” key. They also work with a Web portal which allows you to have a list of “online favourites” alongside the favourite streams associated with the set’s preset buttons.

The Web portals also exist for uploading a user-specified streaming-audio URL to the radio, which can be good for adding new Internet radio streams to your set.

Choosing the right Internet radio for your application

This is similar to choosing a regular radio, especially a premium radio set or music system / component, but you will have to factor in what kind of Internet connectivity you are running. If the site is capable of operating an 802.11g WiFi network or 2.4GHz 802.11n WiFi network operated in “compatibility mode” and secured with WPA-PSK or WPA2-Personal, you can use any set that works with WiFi networks such as all of the tabletops and portables. On the other hand, you may have to prefer a set with an Ethernet connection and, in some cases, use a pair of “homeplugs” to locate the set where you want to have it.

As far as bringing Internet radio to the hi-fi or home-theatre system is concerned, an Internet-radio tuner may be what you need if you are happy with your current  system or have just bought a new receiver or music/AV system. As well, some of the tabletop and portable radios have a line-level output which can be another way of bringing Internet radio to your music system. You would have to make sure your existing equipment has a vacant line-level input such as an AUX, TAPE, CD or TUNER input. On the other hand, it may be worth factoring in Internet radio and network media playback as a feature to look for when upgrading or replacing your receiver or system.

Other things to know

Once you own one of these sets, it may be worth reading the DLNA Media Network series of feature articles in this blog, especially “Getting Started With DLNA Media Sharing” to understand the UPnP AV media player functionality that these sets offer. This can help you “liberate” your music collection held on your computer’s hard disk through your newly-purchased Internet radio,

Some of the Internet radios, most notably the Tivoli Networks and the Pure Evoke Flow are designed along the classic two-piece stereo principles that used to be practiced with some consumer-electronics equipment during the 1950s to 1970s, and commonly practiced with cheaper computer speakers. This is where the radio has one integrated speaker that yields mono sound but, whenever it is connected to a matching accessory speaker, it can yield stereo sound. Most of these sets that work that way have the accessory speaker supplied as an extra-cost option.

Once you know what is involved in purchasing an Internet radio, you can enjoy the fun of overseas, out-of-town and offbeat radio without needing to be near your computer.

Buyer’s Guide–Buying a printer for your small business