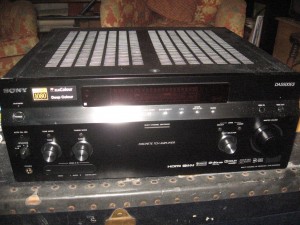 I am reviewing the Sony STR-DA5500ES high-end home theatre receiver which is the first network-capable home-theatre receiver that I have reviewed in my blog. At the moment, Sony have supplied me with the SRS-DB500 2.1 powered speaker set which I will be reviewing in a separate article on this blog, for use with this receiver.

Some of you who may not understand sophisticated audio setups will benefit from a reference page which will explain the terms that I will use when describing this receiver and other audio equipment in this blog.

This unit is the second model down from the top-of-the-line STR-DA6400ES receiver in Sony’s high-end “ES” range of home-theatre receivers but is still very capable in its home-theatre-hub role.

This receiver has the same fit and finish associated with the good-quality Sony hi-fi equipment that has existed for many years/ The controls are smooth and properly responsive and the unit’s finish looks “very polished”. 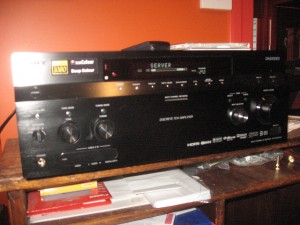 This unit excels on useability in a similar manner to most Sony home AV equipment that I have used.It has that very bright vacuum-fluorescent display that is easy to read even at dim levels and the controls are easy to manage.

This high-end receiver excels in this field of connectivity and flexibility. There are seven 120W power amplifiers built in to this unit’s chassis. You can set up a 7.1-channel speaker setup so you can properly enjoy movie content on Blu-Ray discs that is mixed to a Dolby Digital EX 7.1-channel sound-mix. On the other hand, you can set up a 5.1-channel speaker setup for Dolby Digital 5.1-channel sound-mixes commonly on digital TV or DVD and use the two spare power amplifiers for different setups.

Firstly, you could have speakers in another room to play another stereo sound source to that room or set up a sophisticated “bi-amp” setup where the tweeters and woofers in a capably-wired pair of front speakers are amplified separately. The limitation with this receiver is that there isn’t the ability to have the crossover functionality or the amplifier levels managed in a bi-amped setup.

The multi-zone feature also allows for yet another zone to be catered fro as an audio-only stereo zone but with its own amplifier. Similarly, the secondary zone can be amplified with another amplifier. The line outputs for the extra zones are in fact line-level outputs that are independent of the main volume control and you would have to adjust the sound at the remote amplifiers.

These setups also allow you to “scale up” your sound system as you see fit and can afford the extra equipment. You can even start with a pair of good stereo speakers and, as you can afford them, connect up extra speakers for your surround-sound setup.

There are plenty of audio and video inputs for extra audio and video equipment, Music enthusiasts are even catered for with a phono input for a good turntable as well as two tape loops for recording devices like cassette or MiniDisc decks. These same connections can be used for connecting up a computer’s sound subsystem for recording vinyl or cassettes to the hard disk rather than using those poor-quality USB turntables. Those music enthusiasts who believe that the audio reproduction of a dedicated CD player connected to the analogue inputs is better than that of a DVD or Blu-Ray player connected to the HDMI or optical digital inputs of this receiver can connect the CD player to these inputs.

There is a DMPORT connection for use with optional Sony-supplied modules that provide connection to and control of various portable devices. These include Sony Walkman MP3 players, phones that have Bluetooth A2DP functionality like my Nokia N85 as well as Apple iPods and iPhones..

For video displays, there is connection for two HDMI-equipped video display devices so you can run a projector or smaller “operator-console” LCD screen alongside the regular large-screen LCD or plasma display. The receiver also supports video-signal conversion from regular video signals to HDMI signals, which means no need to connect composite or component cables to the main display to gain benefit from legacy video sources.

The receiver offers some network-enabled functionality but this is limited to playback of DLNA media content with the user controlling the receiver through its remote control and requiring the video display attached to any of the monitor outputs being on to select toe content. For radio functionality, the unit can only work with Rhapsody or Shoutcast Internet radio services.

This network connectivity is made feasible by the receiver having an Ethernet connection. This means that it can work also with HomePlug AV powerline networks when you use a HomePlug AV-Ethernet bridge; and is my preferred “no-new-wires” network-connection method for connecting home-theatre and hi-fi equipment to a home network.

When you navigate a DLNA media server, you have to choose the kind of content you are after – music, pictures or video. If you browse around the same server for content outside the class you selected, this receiver will not start any of that content.

The sound quality is as you would expect for high-end Sony gear, where it is not coloured. I even noticed this with my computer’s sound which was fed through the SACD/CD input and out through the Preamp outputs to the SRS-DB500 speaker set. I switched the unit in to regular 2-channel mode, then to “analogue direct” to assess whether the digital circuitry was colouring the sound. The receiver and the active speakers were set to “tone-flat” – bass and treble at centre positions in order to really assess how it sounded and I had played one of the early “Café Del Mar” recordings from my PC.

The reason I use this kind of recording is to assess the equipment from a mature user’s viewpoint and find out how it handles music other than aggressively-amplified pop music. In the context of the home theatre, it would also include being able to yield the whole soundtrack of a movie or TV series.

I haven’t been able to test the receiver with regular passive speakers but the power amplifiers are something worth trying out and using.

I had mentioned that there could be some points of improvement as far as network operation goes. These include the ability to use the unit’s display and controls to select and control audio material from DLNA servers on the home network, without the need to switch on the TV display. Similarly, the receiver could offer what competing home-theatre receivers offer where you can “tune in to” Internet-radio stations offered by vTuner, Reciva or RadioTime directories.

For operation, a main point of improvement would be to allocate one video monitor as a “control monitor” while the other monitor shows video content. Here, it could allow for a smaller screen to be used for this purpose while the larger screen is used for the primary video.

Save for certain network-media limitations, this receiver would be considered as a worthy candidate for a primary “hub unit” for the main home-theatre area. It is also well-placed for audio enthusiasts or people who have material on legacy formats like vinyl records and want to be able to play these material on good equipment.

The cited output power is based on manufacturers’ specifications with an 8-ohm speaker load and 0.09% total harmonic distortion (minimum quoted in the specifications).