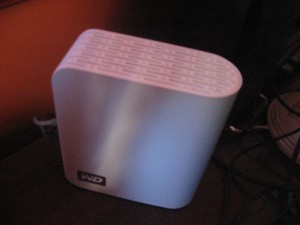 I am now reviewing the Western Digital MyBook World network-attached storage device which is the first such device to be reviewed in this blog.

It is a white box about the size of an average paperback book such as a personal Bible but has a white “operation” light along the spine. This light can be turned off through the Web-based configuration menus under the “System-Advanced” screen in the Advanced menus. There is a vent along the top of the unit to allow for proper cooling.

It can connect to an Ethernet network, even a Gigabit one which would be part of high-end routers and equipment optimised for “next-generation” broadband services. There is also a USB socket for use with adding external USB storage or USB printers that can work as network printers to the network.

This unit has 1 Terabyte worth of storage available on it, which would be the minimum required for these devices. If you use it primarily as a media server, you would have plenty of room for many hours of high-definition video, oodles of “many-megapixel” pictures and many hours of audio content using good-quality codecs.

This is provisioned through one hard disk but the step-up model (WD MyBook World Edition II) has the ability to work with two user-replaceable hard disks and can support a two-disk RAID data-mirror setup. 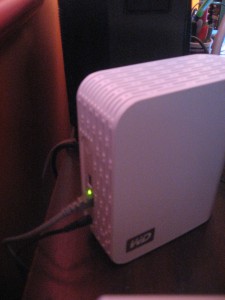 Ethernet connection to the WD NAS

It can work with the common network file protocols like FTP and SMB, but the Samba (SMB) server can’t handle credentials situations where you have the same username and password as one of the computers. As well, it isn’t easy to create a NAS share with a “public read-only” access condition where you have to log in to add or modify files on that share but anyone can read the files.

There is support for “cloud backup” and “cloud remote access” with WD’s MioNet cloud-based remote servers, but I haven’t tried this feature out yet.

The main function that I have appreciated in this NAS is the TwonkyMedia UPnP AV MediaServer function. This positions the NAS as a very capable network media library that provisions the media to standards-based media devices. It can also work as an external media drive for iTunes-based media setups.

This has allowed for PC-free media serving where I could play “ripped” audio files on any of the Internet radios that I have reviewed without needing to have the computer on. As well, it has improved the reliability of my UPnP-based media experience because the network hard disk is doing just that job of providing the media rather than a PC that does this amongst other activities. The UPnP functionality could be better supported by working with other shares that can be set up as “public read-only”, rather than just the “Public” share. It would then increase its validity as a media server in businesses where media collections are at risk of unauthorised alteration.

As I have outlined in the review, I would like to make it easier to provide “public read-only” shares which are able to be edited by authorised users but the files can be viewed by anyone without authentication and media files can simply be provided for playback by UPnP devices. This can make it easier to share media or other files across the network without fear of accidental or malicious alteration or deletion.

There could be some finer control on the status LED by providing for a static “bar-graph” display that indicates how much disk space has been used, or light-up only as a “distress signal” or if the hard disk is in active service. This is so you can know what is going on without that bright light staying on all the time.

I would suggest using this hard disk as a “simple network backup” device or as a dedicated UPnP media server device for the home or small-business network. In the latter usage case, these businesses could easily relegate this unit as a secondary “media-server” NAS alongside their primary NAS that provides regular network file-service functions and establish UPnP AV / DLNA in their realms as I have talked about in a separate article.