I am reviewing the Compaq Presario CQ42 notebook computer which is pitched as an “entry-level” notebook computer. This kind of machine is expected to be used for most Web-browsing and email tasks, office tasks or basic multimedia playback but wouldn’t perform well for advanced media creation or heavy gaming.

The Compaq Presario is finished in a matte black housing that has a textured pattern on the top of the case and on the keyboard bezel. The display escutcheon is still the black edged type like most of the current crop of laptops and hides a Webcam for video conferencing.

This unit is based on an Intel Celeron dual-core processor, another of the processors in Intel’s Celeron “economy-class” processors. Even so, it is capable of providing “up-to-date” performance for most tasks.

It is provisioned with 2Gb RAM, some of which is being used for the display memory like what is accepted for most mainstream laptop computers.

The system’s main hard disk is 250Gb with a separate partition for system recovery data and another one for the HP-supplied software. For removeable storage, there is a LightScribe-capable DVD-RW burner and a memory card reader.

The graphics subsystem is based on Intel hardware and software and can use up to 797Mb of the system’s RAM. This is shown up through a LED-lit 14” LCD display. There is also the ability to connect an external display that uses either a VGA or HDMI connector to the system. Speaking of HDMI, there is support for HDMI digital audio but this comes alive when you connect the laptop to suitable monitor,  HDTV or home-theatre receiver and you would have to make sure that the Intel HDMI Audio driver is your sound device..

This computer can associate with 802.11g Wi-Fi networks and also has an Ethernet socket for Ethernet or HomePlug network segments. Surprisingly for this day and age, it is equipped with a dial-up modem but this may be the only Internet access type for people who live out in the country.

You also have 3 USB sockets and separate sockets for the headphones and microphone. These aren’t provided as an independent sound feed for use with communications applications,

The keyboard is a smooth flat plastic affair with a light and springy touch which may feel cheap, but it is still suitable for accurate touch-typing.  This is aided with tactile markers on the “F” and “J” keys so you can locate the home row very quickly and easily.

The trackpad is integrated into the palmrest in a manner that may be hard to find for people used to an obvious trackpad. Here, it is just a small area under the spacebar and identified with a accent near the keyboard and the selection buttons as a long bar close to the bottom edge of the keyboard. 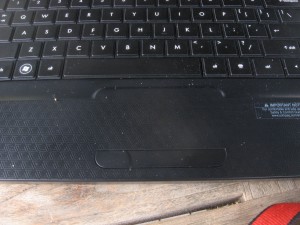 The system is delivered with Windows 7 Home Premium but HP have also supplied software like Norton desktop security software and Cyberlink multimedia software.

One main limitation would be the hard disk space where the unit has a relatively small hard disk to what is available for most laptops. This may put a limitation on certain user classes like senior-secondary and tertiary students who will have a large amount of work but also run the machine as a jukebox. Here, I would look at providing a version with a 320Gb hard disk but with other features being the same, either as a “product refresh” or a separate model.

Another point of improvement could be to provide wired Ethernet as a Gigabit connection especially as this will be the standard for equipment that is part of “next-generation” broadband.

Other than that, it has the features that would be expected by someone buying a laptop on a budget.

I ran a “DVD run-down” test to identify how long the battery would last under pressure and had found that the battery would run for 2hours, 10 minutes with Wi-Fi on and 2 hours, 30 minutes without Wi-Fi on when playing a DVD. This was with me using the Cyberlink DVD player utility rather than Windows Media Player. The graphics have appeared to be smooth through the movie even for a low-end full-size laptop.

This computer can work best with Web browsing, basic word-processing and other office tasks. As far as multimedia and gaming is concerned, it would work well for most video playback tasks or non-demanding games , especially when on AC power.

Here, I would recommend it as a “first laptop” for secondary-school students, a not-so-good large-screen optical-drive-equipped alternative to a netbook that is used as a secondary laptop or as a large-screen document-friendly“portable computer” for a person who uses a desktop computer as a main computer.

It can also bee seen as a “budget alternative” to a secondhand laptop computer for people who need to “cut their teeth” on computing.