I am reviewing the Sony VAIO E-Series laptop computer which is Sony’s attempt to create a VAIO laptop that can be positioned as a sole computing device for small business owners and similar people.

This laptop is another attempt to upstage the MacBook Pro laptops in aesthetics and functionality. It is finished in a cyan-blue housing with a black keyboard and keyboard surround. There are different variations with a larger variety of different colours available for the series.

This unit comes with an Intel Core i3 multicore processor and works on 4Gb RAM that is shared with the display subsystem’s memory. This configuration seems to be “de rigeur” for most mid-range laptops offered on the market by the major manufacturers and is capable of handling most office and multimedia tasks.

The test sample came with a 500Gb hard disk which has all of the capacity as one logical drive rather than the usual practice of creating separate partitions for recovery data or vendor-supplied tools. There are machines in the range that have 320Gb at a cheaper price or 640Gb at a more expensive price. This is a size that I would find adequate for a computer that is expected to be one’s only computing device used for their work and personal computing needs.

There is a standard DVD burner supplied as the optical drive but you can get a Blu-Ray reader / DVD-burner drive as an extra-cost option.You also have a separate SD card slot and Memory-Stick card slot for removeable storage.

This computer’s display subsystem is driven by an ATI Mobility Radeon 5650 subsystem with 2.8Gb shared with the system’s main memory. It uses a 15.5” LED-backlit widescreen LCD as the main display but can be connected to an external display device using either a VGA connection or an HDMI connection. 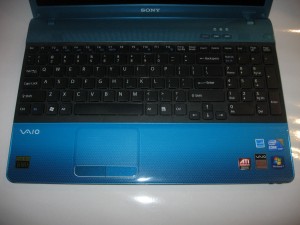 The keyboard is a chiclet type with a dedicated numeric keypad that would please business users. It has shied away from  requiring you to press the Fn key to gain access to the standard function keys, a practice that has been required with other competing laptop designs. Yet it is still suitable for long-haul computing tasks because it doesn’t appear to be cramped.

There are dedicated keys for use in gaining access to the VAIO shell extension, the Web and Sony’s VAIO ASSIST program. The trackpad is a similar design to some of the Dell notebooks I have reviewed where it is a recessed area finished in the same style as the palm rest. The buttons that you press to select the option are distinctly different and are actual buttons rather than marked-out areas on the trackpad.

The computer uses an 802.11g/n Wi-Fi wireless connection or a wired Gigabit Ethernet connection to connect to your network. There is the option of an 802.11a/g/n dual-band Wi-Fi network available at extra cost if you have deployed such a network.

The computer has an ExpressCard-34 slot which you can use for ExpressCard-34 (slim-profile) expansion cards such as wireless-broadband modems. As well, there are four USB 2.0 sockets with one that is shared with an eSATA external-hard-disk socket. You also have a headphone socket and a microphone socket located up front.

The VAIO E-Series is powered by the Windows 7 Home Premium operating system but I would recommend that business users use the “Anytime Upgrade” option to upgrade to either Windows 7 Professional or Ultimate to do it justice. There is the complement of multimedia programs that Sony provides for all their VAIO laptops, including a VAIO DLNA media server.

With all optical-drive-equipped laptops, I run them through a DVD run-down test with a movie to assess how long the battery will llast under a difficult environment. This is with the display showing the movie constantly and the optical drive spinning constantly. This unit was able to make through 1 hour, 42 minutes with wireless networking and Bluetooth enabled and 1 hour, 50 minutes without wireless networking and Bluetooth enabled. The DVD playback experience was smooth even with scenes that have a lot of action in them.

This is another laptop that I would consider as being useful as a portable computing device for users who perceive it as their only computing device. This would includ users who want it as a “work-home” laptop. It doesn’t have the same “managed” business-class security complement that some business users would demand but would work as a basic all-around “work-home” laptop. It would also be another machine that I would put on the list of laptop computers that I would recommend to a parent who is giving a laptop to their son or daughter who is starting tertiary education and living at a dorm / hall-of-residence or similar facility.

It is also another machine that can can be considered as a Windows-powered alternative to the Apple MacBook Pro laptop and is priced in the similar range and offers similar performance. It may therefore be considered as a laptop solution for people who are disaffected by Apple’s recent goings-on and want to “move away” from Apple, yet still want a brand-name multimedia-capable laptop.