I am reviewing the HP Mini 210 netbook which is pitched as Hewlett-Packard’s main nethook for this year. It is available in a few different colours or can be purchased for extra cost as the Vivianne Tan edition which has the design work of this famous handbag designer on its outside. 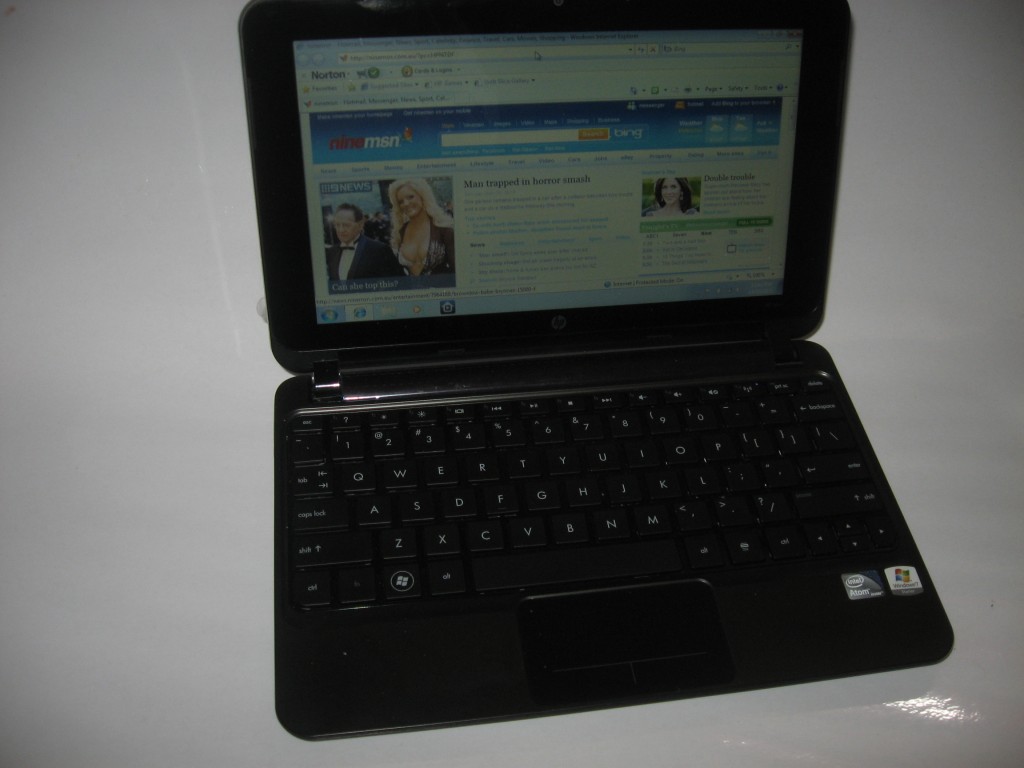 The small keyboard is of the “chiclet” type which appears to be flat and more at risk of errors. There is also a touchpad which works in a similar manner to the Apple Macbook Pro and the HP Envy. This means that the selector buttons are areas that are marked off at the bottom of the touchpad area.

Like most laptops, this unit still requires you to press the Fn key to use standard functions and the Fn functions on this unit are written very dimly. This will make it hard to use the function keys like F5 for particular tasks like reloading the browser. I have found that there isn’t a PgUp or PgDn key on the keyboard which is important if you wish to browse large documents or Websites.

As well, the keyboard is very cramped which is common with all netbooks. This therefore makes it not suitable for long sessions of typing.

This unit still has the similar audio and video capabilities for a computer of its class. It can reproduce a Youtube video properly for the bandwidth of the video and is still efficient on the battery when this happens. You also have  stereo sound reproduction but there is still that tinny sound that is common with laptop and netbook sound systems.

Therefore the unit can still do most tasks expected of a netbook on its own battery for a long time.

There is a pre-boot “quick-start shell” which allows you to do some elementary tasks without you having to fully boot Windows 7. This allows you to work with the Web, including viewing selected Webmail accounts; use an online calendar or  play music and view photos held on the computer’s storage.

I would like to see this “quick-start shell” extended to support for a desktop mail client for POP3/IMAP/ActiveSync mail setups which most home and small business users would use as well as support for access to DLNA media servers for online media playback. This could be extended to use as a DLNA Media Control Point for use in playing media on DLNA MediaRenderer devices.

The higher-capacity hard disk can be of benefit when you want to do things like preview many digital pictures or work with a lot of email using a desktop email client like Windows Live Mail. Other than that, it has the typical capabilities of a netbook.

This means that I would still place it as a secondary-use traveller computer or as a “floater” computer for the home network for accessing the Social Web in front of the TV for example.