I am reviewing the Brother DCP-J925DW multifunction printer which is part of Brother’s newest run of A4 inkjet all-in-one printers that are destined for the home and home office. There are variants of this model that have integrated fax functionality.

There is a pack of the high-capacity ink cartridges available for AUD$109.95.

The Brother DCP-J925DW is housed a a relatively shallow chassis with a shallow automatic-document-feeder lid that has a swirl-type pattern. This has been made possible through the use of Brother’s “capillary” system with the ink cartridges mounted up front rather than on the printhead.

The printer has a single tray but there is a mezzanine tray that is used for 4×6” snapshot paper so you can print out photos as snapshots, a different method to what HP has done for some of their high-end Photosmart printers where these have totally separate paper trays. It also has a DVD/CD printing mechanism so you can print on to inkjet-printable optical discs.

This printer can connect to your network via Wi-Fi or Ethernet and the Wi-Fi setup experience was surprisingly easy. It needs the time to be set in order to work with the Web-connected printer functionality, but Brother could implement an NTP-based clock setup option rather than requiring the user to set the time, just asking the user for their time zone and whether their time zone observes daylight-saving time. 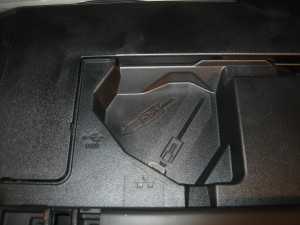 Like other Brother inkjet printers, this printer has the the inks loaded in the front and obviates the need to lift a heavy lid to replace the cartridges. But, like the MFC-J6910DW that I previously reviewed, it requires you to open the lid to find the USB and Ethernet sockets if you need to connect it directly to the host or to an Ethernet network. 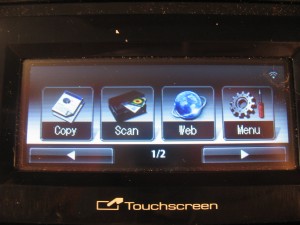 The control panel for this printer is primarily a touchscreen LCD but there are two start buttons and a cancel button as well as an on-off button. Compared to the HP touchscreen printers, this provides for surefire “start” and “stop” controls on the printer for those of us used to the traditional buttons. The screen may be found to be too small for some activities like choosing pictures to print and may be hard to read for those of us with limited sight.

The Brother DCP-J925DW can copy as expected with one-touch ease but also has an option for improved book copying which may please those of us who copy a lot of material out of books and other bound documents. Think of copying those recipes that friends need out of those cookbooks as you “cook up a storm”. 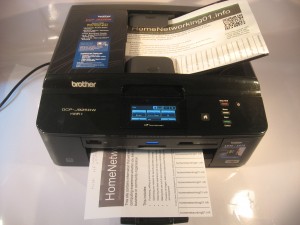 There is also the ability to print from directly-connected digital cameras or camera memory cards with the functionality that is expected of that feature.

The printer also works properly with the Brother iPrint&Scan mobile app so can print images and PDFs held on your smartphone. It can also scan to your smartphone with the phone saving the images as JPEGs.

The WebConnect online services that Brother provided allows for “hot-seat” use by multiple people and work with the popular social networks and photo-sharing services. As far as Facebook is concerned, it only offers uploading of images to the user’s Photo Albums from the scanner or camera card.

In, use, the driver showed the same level of useability as the software supplied with other Brother printers that I reviewed. This included highlighting the options that are in force and even using the “pages” graphics to show the kind of duplex or booklet printing that was in force when you used these features.

The Brother DCP-J925DW printer is quick at turning out documents but takes a very long time at turning out A4 photos on the glossy paper. This may be helped with an increase in memory and processor speed.

As well, it can print on both sides of the page very accurately with a minimum time penalty, which can be of a bonus if you rely on auto-duplex printing as a desktop-publishing tool, not just to be “green”. This was exemplified by my printing out a “download-to-print” door-hanger flyer from the Stop The Traffik anti-human-trafficking website that was pitched at hotels as a guest-awareness measure about this problem.

There is a high-pitch tone from the printhead when the Brother printer is pausing during a job and this may annoy some people, but would be expected of piezo inkjets because of the way they work.

When the Brother DCP—J925DW prints out photos, the pictures turn out darker and more defined compared to its HP and Canon home-use peers that I have reviewed. There is also a strong yellow component in these photos compared to the Brother A3 printers that I reviewed but this yellow is similar also to the same HP inkjets.

As I have said before, the Brother DCP-J925DW could benefit from a faster processor and more memory so it can handle larger or more detailed print jobs more effectively.

The automatic document feeder could be improved in its useability by indicating where the original document should sit under and preferably in a contrasted colour. This can help with newer users who have upgraded from other multi-function printers that use the orthodox automatic-document feeder.

The Web-connected functionality could support a few more features like email-to-print or the ability to print from Facebook image collections. It, like the other Brother printers, could also benefit from UPnP Printer functionality so as to support network printing from digital cameras and interactive-TV applications.

I would position the Brother DCP-J925DW as a cost-effective general-purpose home-use printer for the connected home as an alternative to the HP Photosmart 7510 if you don’t worry about fax or ePrint capabilities. It can also work as a secondary printer that could do supplementary work to the main laser or inkjet multifunction printer, such as in a study or rumpus room.