I am reviewing the Dell Inspiron 15R consumer laptop which is pitched by Dell as a value-priced mainstream consumer laptop that would suit most home users. It is another example of the recent trend by companies making equipment for the Windows platform to upstage Apple on aesthetics, build, functionality and performance in a cost-effective manner. 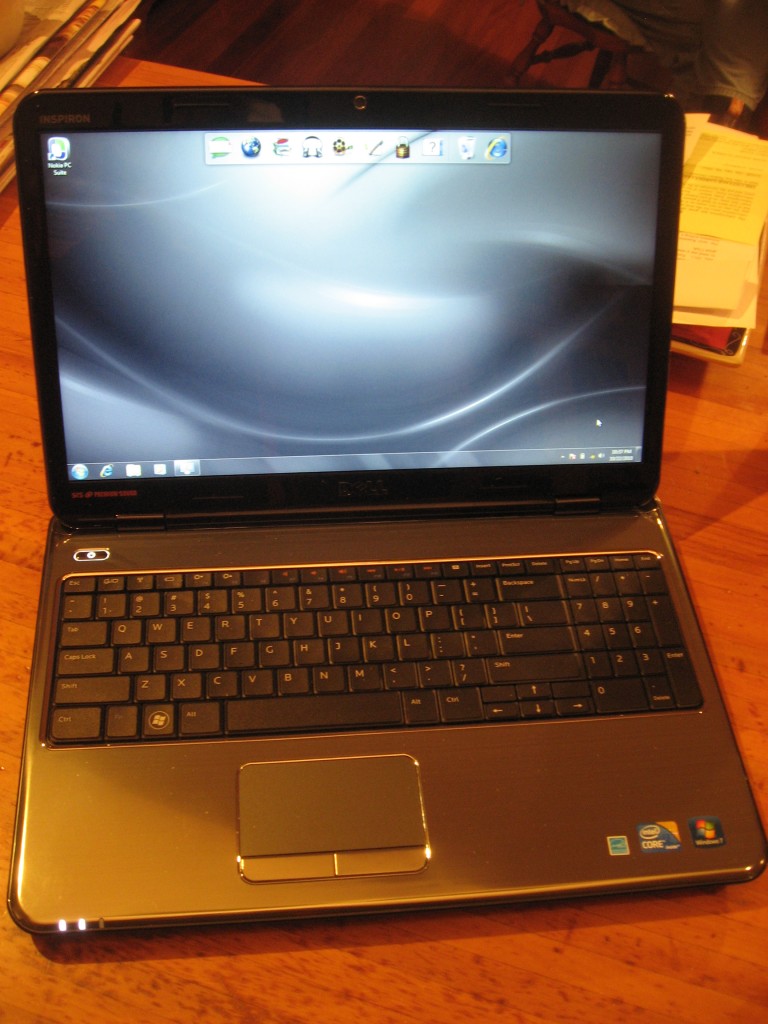 The review unit isn’t styled in a manner that copies the aesthetics of Apple’s MacBook range of computers. The back of the display is finished in a red colour but is available in a range of other colours when you order the computer through Dell’s website.

As mentioned below, the keyboard area isn’t colour-coordinated to the back of the display. Here, the keys are finished in black and set against a chrome-look bezel that reminds me of the way various car manufacturers used a chrome panel around a group of controls on the centre console or around power-window buttons on the armrests of high-end vehicles to emphasise luxury.

These aesthetics may appeal to those of us who like to move away from the “Apple-copy” styling that is happening with some portable computers. The only limitation with this glossy finish is that it attracts fingermarks too readily. 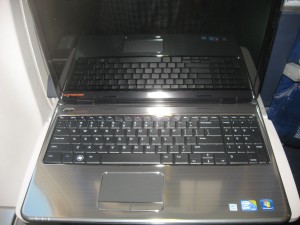 The computer has a numeric keypad alongside the keyboard and this keyboard is the orthodox kind that Dell uses rather than the “chiclet” calculator-key layout that I have seen in other laptops.  The trackpad is even made to be a “distinct” area with easily-identifiable buttons rather than the Macbook-inspired panel which has an area marked out for the buttons.

There is a 500Gb hard disk that is split in to 400Gb user space and 37.4Gb OS space plus a system-recovery partition for the main secondary storage. As well, a DVD burner and an SD card reader provide for the system’s removable storage needs,

This capacity would be suitable for a consumer notebook that is intended to become the sole computing device for someone who wants to head to the laptop-based “new computing environment”.

I have observed the visual experience when running the move as part of the battery rundown test and it was smooth even through the scenes where there was a lot of action. The sound is very good if played through headphones or external speakers but like all laptops, it leaves a lot to be desired when played through the computer’s own speakers.

I have run the computer through the DVD run-down test and it has completed 2 hours, 17 minutes while playing a feature movie through Windows Media Player and the wireless functionality was enabled. It played the same DVD feature movie during the run-down test for 2 hours 39 minutes with no wireless modem in use; a task that would be performed when the laptop is used on a long-haul flight.

When I took the computer “on the road”, the battery duration was  good for word-processing and Web-browsing even though it was powering my mobile phone as part of a tethered wireless-broadband-modem setup. I was able to get a few hours out of a USB tethered Nokia N85 when I ran the computer on batteries only and the phone was the wireless-broadband modem.

When I have used this computer, it hasn’t run hot too quickly. This would be typical for a “standard-form” large-screen laptop where there is enough room for the components to breathe.

I would recommend this laptop as a value-priced option for most of us who want a large laptop computer for use as a main computer at home — the new laptop-centric computing environment — or as part of tertiary study. At a pinch, it may suit the small-business user who uses it as a computer to take between the office or shop and their home.

It wouldn’t be good for regular air or other public-transport travellers who want to use the computer while on board the plane or other transport vehicle. This is  because it is too large for typically cramped spaces like urban public transport or the economy-class cabin in a plane.