I am reviewing the Fujitsu TH550M netbook-sized convertible notebook. This is a notebook computer which has a touchscreen or stylus-operable screen that swivels to become a tablet computer.

It is the first of this kind of notebook that I have had for review and is an example of what the proposed “netvertible” form factor could look like. This is although it runs the Windows 7 desktop operating system with touch and stylus operation built in to it as well as having full processor capabilities rather than the netbook-grade processor capabilities. 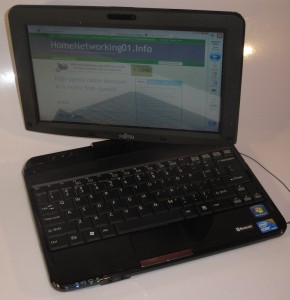 The display swivels to become a tablet

The Fujitsu TH550M convertible notebook is really about squeezing a quart in to a pint pot. Here, the “engine” is an Intel Core i3 processor which would be at home in a 13” ultraportable and the hard disk has a total capacity of 500Gb with cheaper variants having a 320Gb hard disk. Even the supplied operating system is Windows 7  Professional which is the “business package” version. 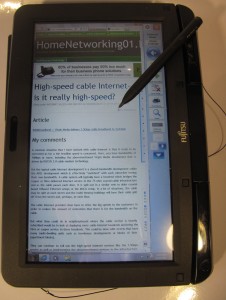 The notebook as a tablet

This is compared to a typical netbook which would be Intel Atom powered, have 250Gb on the hard disk at the most and run Windows 7 Home Premium. The only thing in common is the amount of RAM available which is 2Gb that is shared with the display memory.

The Fujitsu TH550M is about the size of a small book and is finished in a piano-black gloss finish. There is the sense of very good build quality especially with the flip-screen mechanism.

Like the typical netbook, this Fujitsu T-Series notebook uses a keyboard that is cramped and it may be difficult to touch-type accurately on this computer. There is also a very small trackpad with chrome-finished buttons and a rough tracking surface. This makes it easy to determine the sensitive area of the trackpad without you looking.

The main feature is the screen being a touchscreen that can respond to your fingers or the supplied stylus. The small screen size may make it hard to select certain operating-system icons like the icons on the edge of the windows. 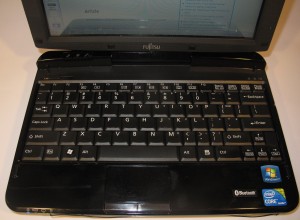 This Fujitsu TH550M convertible notebook is driven by an Intel HD graphics subsystem which would be adequate for most tasks, even basic video playback. It can be connected to an external display via a VGA or HDMI connector.

The touchscreen is that typical glossy finish that can yield annoying reflections but in other cases, does the job adequately.

The Fujitsu can last for many hours on regular tasks even though it was on the power-saving setting by default. This included an evening’s worth of use of the Social Web where I was monitoring and interacting with the #HackGate hashtag on Twitter during the ABC24 live broadcast of the inquiry in to the phone hacking scandal concerning the Murdoch press in the UK.

I showed this computer to a woman friend and she had considered it as a viable “personal computer” that would suit her needs. This is after she had previously talked with us about personal-computing solutions like tablets and small laptop computers that had impressed her

An improvement that I would like to see for convertible notebooks would be a touch-optimised shell for the Windows 7 operating system, so these computers can be a worthy competitor to the iPad and Android tablet computers. This could include the extension of “newspaper apps” and “book-reading apps” to the Windows desktop platform rather than focusing them to the Apple iPad.

This situation may be rectified with the installation of Windows 8 on these convertible notebooks when it arrives or a dual-boot setup with Android and Windows 7 for current-issue machines.

For this model, I would like to have the cord that tethers the stylus to the computer able to retract in to the unit in a similar vein to the typical vacuum-cleaner’s retractable power cord. Here, this can avoid further damage to the cord, pen or notebook if the cord is snagged on items in the typical briefcase or laptop bag.

I would consider the Fujitsu TH550M as a computer for those who want a “bridge” between a tablet computer and a netbook; rather than carrying around an accessory keyboard with a 10” tablet computer like an iPad. This is more so i, offer the bf you mainly use line-of-business applications or create content.

As well, other members of the Fujitsu T-Series convertible notebook range would, with their different screen sizes, offer the bridge between the tablet and the regular notebook with this distinct interface kind.

Investing in an external graphics module for your laptop