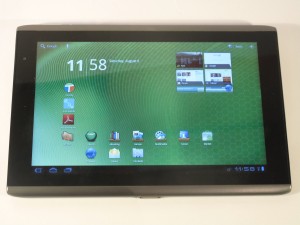 This article is affirming the idea of using a tablet computer like the Apple iPad or the Acer Iconia Tab in the lounge room as you watch TV. Some people may object to this because of the “too many screens” argument. But of course, you will still look at the big screen for the video content.

One of the most common TV-related apps for the iPad and tablets of its ilk is as a personal screen for viewing content. This could be in the form of downloading or streaming the content to the tablet device and has been subjected to various legal strangleholds with Hollywood.

But it also has been taken further with broadcast-LAN tuner adaptors which tune in and stream TV content to these tablets once controlled via a special app. As well, the use of DLNA media player software can allow you to view video content held on your home network through these devices.

Another application of interest is for the tablet to work as a remote control for the large-screen TV. Here, this would work with apps delivered by TV and set-top-box manufacturers to the various app stores for the tablet platforms.

It would work hand in glove with programming your PVR, use of interactive-TV applications or even using the interactive functions of a Blu-Ray disc; as well as navigating an increasing array of TV channels.

Of course, I have a doubt about this when it comes to activities where you need instant response. I would like to be sure that you tap MUTE on the tablet and you are sure that the racecaller voice that is part of that commercial isn’t heard the moment you press it for example.

As well some manufacturers may limit this function to their tablets, especially if the tablet is the same brand as the TV in question; usually as a way to reinforce brand loyalty.

In a similar way to the previous “small personal TV” application, a tablet computer can be used to show content on the large television or video projector. This can be through a direct connection from the tablet’s miniHDMI socket or AV-out jack to the TV or by pushing the content to an Apple TV or DLNA network media player.

A very common application that I have noticed with smartphones and tablets is to engage in Internet use while watching TV. Examples of this include researching a TV programme on IMDB or a concept that was used in the TV program; using the tablet as a persistent scoreboard during a sports game or updating the Social Web during a TV show. I have expanded on the “persistent scoreboard” application in this site by mentioning an increasing number of “scoreboard apps” that are available for most sports codes and leagues and the role of these apps in enjoying your favourite sports fixtures.

The persistent scoreboard could be an app in itself or simply an always-refreshed Web page; and could remind you of where the players stand in that match you are watching. In some cases, the apps provide access to player / team information as well as on-demand video replays or interactive progress maps. Of course, you could head over to other commentary sources for comments other than what the TV commentators are barking about.

As I have seen, a lot of TV shows are integrating the Social Web very tightly in to their programming fabric. This can be typified with selected Twitter and Facebook comments being read out by the compere or a ticker with Twitter comments crawling across the bottom of the screen. Even news and public-affairs events will have official or unofficial tickers running on Twitter or Facebook as people post up comments on these events using the Social Web.

The tablet computer may work better than the “smart TV” Social-Web apps because the TV usually works with one account at a time and you won’t see the show’s video occupying the screen as you post your comment. One or more tablets (or small computers) can perform this function in an individual manner for individual viewers,

In most cases, a Wi-Fi connection to the home network and broadband connection is all that is needed if the tablet is just being used at home; and would be necessary for network-media-adaptor use. This could allow you to buy a Wi-Fi-only model if it is to stay primarily at home or not be used with an external wireless-broadband router on the road.

As I have said, the tablet is now working as a supplementary screen in the TV lounge area rather than just as an ebook reader and email terminal.