Why use your smartphone or tablet with your NAS 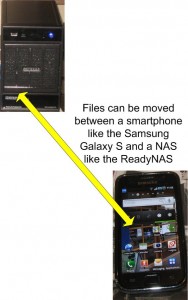 There are times when you want to upload or download files from your network-attached storage device using your smartphone or tablet computer. Examples of this include offloading files from a low-capacity device, through making media that you took or acquired through your device available at all times from your DLNA-equipped NAS to simply backing up data held on your device.

Of course, you may simply treat that NAS simply as a network transfer point for your data. Examples of this may include working with documents that you start on an iPad and want to complete on your regular computer or conceptual “rough-shot” pictures that you take you your phone’s camera and want to work with further using Photoshop and other software on your computer.

How is it done

But how am I able to do this with my network-attached storage and my mobile devices? Some network-attached storage devices may use a Web front for the file collections where as others may implement certain extensions to DLNA for uploading and downloading some media files. This latter situation is infact a long-term goal for the DLNA Home Media Network, especially when it comes to shifting or syncing multimedia files like music or images.

These environments don’t necessarily provide a consistent or ideal user experience for the mobile device user. This can typically be due to a Web front that is optimised for desktop use only to DLNA server and client apps not offering the proper sync or file-transfer functionality.

The preferred method that I would use is SMB/CIFS network file handling which every network-attached storage device supports thanks to Linux’s SAMBA software. Even the USB-linked file servers that are an increasing part of high-end routers like the Freebox units do support SMB as well as the Internet HTTP and FTP file transfer protocols. This has been a standard for regular computing devices with the Microsoft Windows Platform since Windows For Workgroups 3.11, then was exposed to Linux regular computers through SAMBA and has been exposed to the Apple Macintosh platform since MacOS X.

The platform-based mobile devices now can join the SMB party through the use of SMB-enabled file-manager apps. These are typically low-cost or free apps that expose the mobile device’s file system and the SMB file shares (entry points) made available by computers or network-attached storages. Some of them have file-viewer functionality for file types not supported by your device’s file handlers.

ES File Explorer – I use this on my phone (Android Market)

The various app stores for the popular mobile-device platforms will list more of the file manager apps with SMB file transfer and you can find them using the terms “SMB file transfer” in your search query.

It is also worth noting that your NAS’s vendor may offer file-transfer apps for their device on the iOS and/or Android platforms so you can transfer the files to their device. These programs may also work with the remote-access functionality that some of the consumer and SMB NAS units provide, thus keeping login credentials for the devices and streamlining the remote-access experience.

Other issues worth highlighting

You may have problems copying content that you purchased with iTunes on your iPhone or iPad directly to the NAS due to Apple’s setup for these devices. But they have improved the iTunes and iOS setup to allow a user to download the purchased content to an instance of iTunes run on a regular computer even though they purchased it on the iOS device. This works best if the regular computer’s iTunes library is referencing the NAS in question.

It will also be important to make sure that audio content is downloaded as MP3 files rather than protected M4A files.

One way that Apple can work this situation out better is to implement read-write ability to iTunes (DAAP) servers for the iPod media-management app in their iOS platform. Here, the software could then support improved “offload” functionality. This may not come about due to Apple’s investment in and their fanbois’ preference for the iCloud as a large-capacity storage service.  But practically-minded Apple enthusiasts could place more value on a NAS as an extra-capacity data store so they know where their iTunes content is all the time.

When you transfer files between your mobile devices and the NAS, make sure that you have a strong Wi-Fi signal at your mobile device and that the device has sufficient battery strength. This could be achieved through having the device connected to its charger while the transfer goes ahead.

If you are transferring media files to the NAS, you would need to transfer them to the media folders that are referenced by the media-server software on that device. This may be made easier by using the file manager software’s “bookmark” or “favourites” options to point to the start of the NAS’s media folder tree.

It is also worth keeping other personal and workgroup shares on the NAS simply for backup or transfer purposes and referencing these with your file-manager app.

Once you are able to know that you can use the SMB file transfer method for moving data between your NAS, tablet and smartphone, you can see more value out of these mobile-computing devices.

First HomePlug AV2 adaptors on the market from Linksys