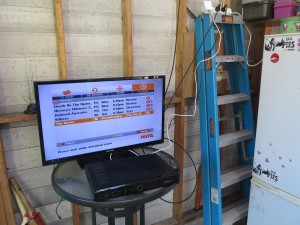 He has his cable TV and download-to-view in the man-cave!

Most of you may have seen me incite the use of HomePlug powerline-network technologies as a viable option for multiple-building home network situations like linking that granny-flat, garage or barn to the Internet service coming in to the main house but may have doubts about whether I have seen it work for myself. Now I have set up such a network and seen it work for myself.

Last Sunday, I had visited some friends of mine who had just moved to a new house. This outer-suburban house had come with a detached garage where some of the space was purposed as a “man-cave” by the man of the house and he even had cable TV installed out to this location.

But the cable-TV service was augmented with a “download-to-view” movie-rental service which depended on the set-top box, which was a PVR, being connected to the Internet. The main set-top box in the house was already connected to the Internet and the home network via a HomePlug AV500 powerline-network segment using HomePlug adaptors supplied by the cable-TV provider. But the man of the house, who is IT-savvy, had a pair of “homeplugs” compliant to the same HomePlug AV500 standard as the existing segment. 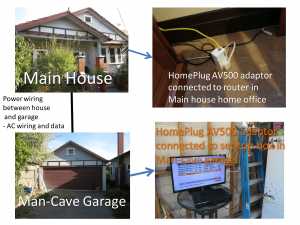 What this is all about

Here, I integrated one of the “homeplugs” in to this segment using SimpleConnect push-button pairing to make sure it works as part of the segment. Then I took this adaptor to the “man-cave” garage and connected it to the set-top box there. This setup worked reliably and promptly with the pay-TV provider’s “download-to-view” movie-rental service by permitting the download of two standard episodes of an American TV series.

This setup underscored the idea of the HomePlug technologies working as part of a multi-building home network. The requirement for this to work properly is that both main building and the outbuilding have to be on the same electrical service i.e. behind the same electric meter. As well, they will work properly where the buildings are located relatively close which may be around 150 metres (164 yards), typically represented by a suburban block or a cluster of buildings on a country property located close together.

For reliable operation, the electrical connection between the house and the outbuilding of concern has to be sound and not likely to deteriorate during bad weather. This can be a concern with older houses where the electrical infrastructure has been allowed to “go to pot”.