I am reviewing the Sony VAIO J Series desktop computer which is the first of this class to be reviewed on this site. This computer is an “all-in-one” design with the computing electronics, secondary storage and screen in one box and the keyboard and mouse as separate entities.

This computer-design style was initially put on the scene with the early sewing-machine-sized “transportables” like the Commodore SX-64, and IBM’s and Compaq’s early portable PC offerings. But this design was legitimised and made popular with the Apple Macintosh since its inception in 1984 and underscored with the iMac lineup offered by the same company since 1999. Now, over the last five years, a selection of big computing names associated with the Microsoft Windows platform have brought this design in to being for the desktop as a legitimate alternative to the traditional “three-piece” desktop-computer design. 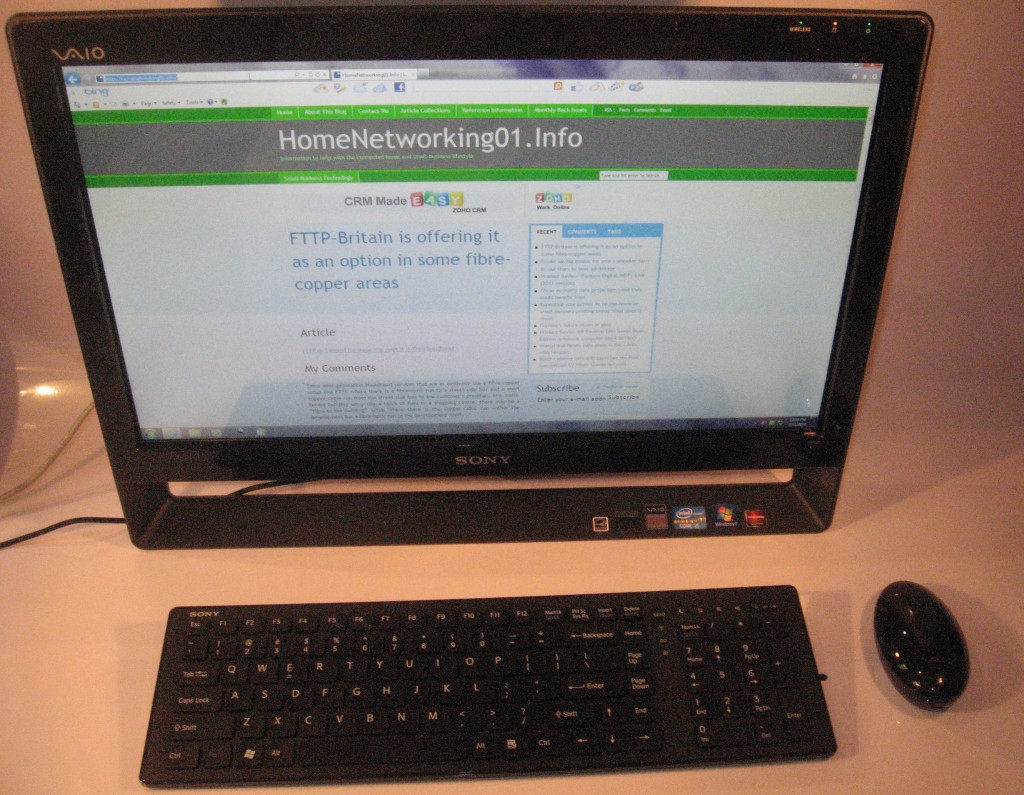 The Sony VAIO J Series all-in-one is well-built and the main unit is meant to resemble a picture frame with a kickstand on the back.  This is in contrast to the pedestal look that Apple has associated with the newer iMac computers. The front is finished with a piano-black bezel for the screen with a few status LEDs at the top edge glowing in a similar manner to the lighting on a classic pinball machine. 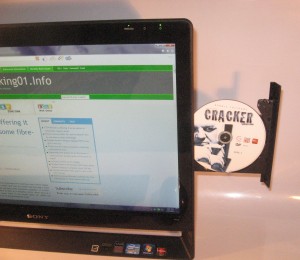 The DVD burner – loads on the side using a vertical drawer

An improvement that I would like to see would be to support wall-mounting or similar “integrated” mounting setups with the back sockets arranged in a similar fashion to those on a flatscreen TV, as well as a VESA-compliant wall-mount anchor point. For some people, this may be a deal-maker or deal-breaker when it comes to aesthetics.

The power supply is a “lump”-style external unit which reminds me of the typical laptop’s power supply, thus allowing for reduced operating noise and increased power efficiency. This can be an annoyance if you are used to the AC cord plugged directly in to the computer but it can be hidden discreetly, like behind a desk or a bowl of fruit if you still want that neat look.

Through its use. I noticed a slight resonant hum while it was in full operation. This could be rectified with the fans and the hard disk being acoustically isolated such as being mounted on rubber washers and gaskets.

The Sony VAIO J Series computer uses a wireless keyboard and mouse as well as a touchscreen. The wireless link isn’t a Bluetooth-driven link but could benefit from this in order for the keyboard to work as a text-entry device for the PlayStation 3 or so larger and better Bluetooth wireless keyboards and mice can be used with the computer.

The keyboard’s size is small enough to store in a drawer lengthways, which can benefit applications where you would like to keep the keyboard and mouse hidden when not in use. There is that hard touch and feel that is close to the original IBM PC keyboard, where you feel as though you are typing on a hard surface. This may be OK for longer typing sessions.

The touchscreen has the multi-touch response and is very responsive in a similar way to most smartphones and tablets. An operating system like the upcoming Windows 8 with its Metro-style interface would let the touchscreen shine in many ways, but the VAIO software supplied with this computer does do justice ti this user interface. If you do buy this computer, make sure you upgrade to Windows 8 when it is released to gain benefit from this experience. 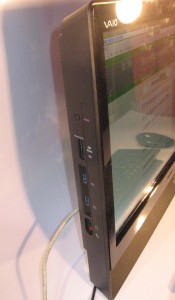 The network connectivity is in the form of a Gigabit Ethernet wired connection and an 802.11g/n Wi-Fi wireless connection. Here it could benefit from a dual-band 802.11a/g/n wireless connection where wireless-network performance is desired. As well, it is equipped with Bluetooth which would work properly with accessories that work to this standard. This could be improved with Bluetooth 4 “Smart Ready” connectivity in order to provide for a standards-based wireless keyboard and mouse that work on regular AA batteries. 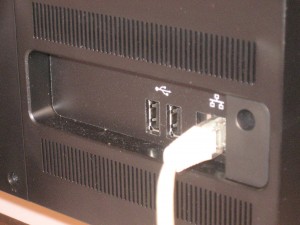 Sony could sell the VAIO J Series computers as a run of models with differing processor, RAM and hard-disk specifications at different price points rather than just one model with one set of specifications. Here the specifications  could vary with 500Gb to 1 Tb for hard-disk capacity, 4Gb to 8Gb for RAM memory and / or video-display subsystems having 1Gb dedicated display memory.

They could also offer a “broadcast kit” as an option to allow the computer to pick up broadcast radio and TV content local to the area. This would be in the form of a tuner module that works with ATSC digital TV and HD radio (IBOC digital radio) in the US or DVB-based digital TV, DAB-based digital radio and FM RDS analogue radio in European and Asian areas; and allows this unit to become an “all-in-one” entertainment centre with access to broadcast content.

As far as the software is concerned, VAIO Media Gallery could be built upon Windows Media Player when it comes to handling DLNA network media content. This means that it could handle more media file types properly like WMA audio.

I would position the Sony VAIO J Series all-in-one computers as a fixed or transportable “few-piece” computer alternative to a large-screen laptop. This is if you are considering the computer to be a household computer that exists in the family room or kitchen area or even as a “first” computer system for someone who is moving out. The cost may appear to be prohibitive but if you are considering the requirements for a typical “traditional-form” entry-level desktop with a system uint, a good-quality 21″ LCD monitor, and a wireless keyboard and mouse for average use, you may think of a bargain, especially if you crave the touchscreen feature.

It can work as a touchscreen POS or similar-application terminal for some businesses where there is a modest amount of activity and the system is primarily client-server based. For example, this may be a “back-office” management computer in a café or bar where the computer may be required to “ring up” orders for function space that is located near the office. Similarly, it could work well as a reception-desk computer in an environment where elegance is desired.

I would also consider the Sony VAIO J Series as a viable future-proof Windows-driven alternative to the Apple iMac family, especially if an Apple user wants the “all-in-one” look but wants to head to an “open platform” computing environment.

On the other hand, I wouldn’t really recommend it as a “serious gaming rig” for those of you who are craving a performance-driven environment to play something like World Of Warcraft.