I am reviewing the Toshiba Satellite P750 multimedia laptop which is Toshiba’s effort at a work-entertainment multimedia centre that would suit current needs. It is a 15” equivalent of the Satellite P770 which is on a par with the Dell XPS L702x multimedia laptop. It is also infact the first Sandy-Bridge-driven laptop of this mainstream size to have the full “multimedia” works to become available for review on this site. 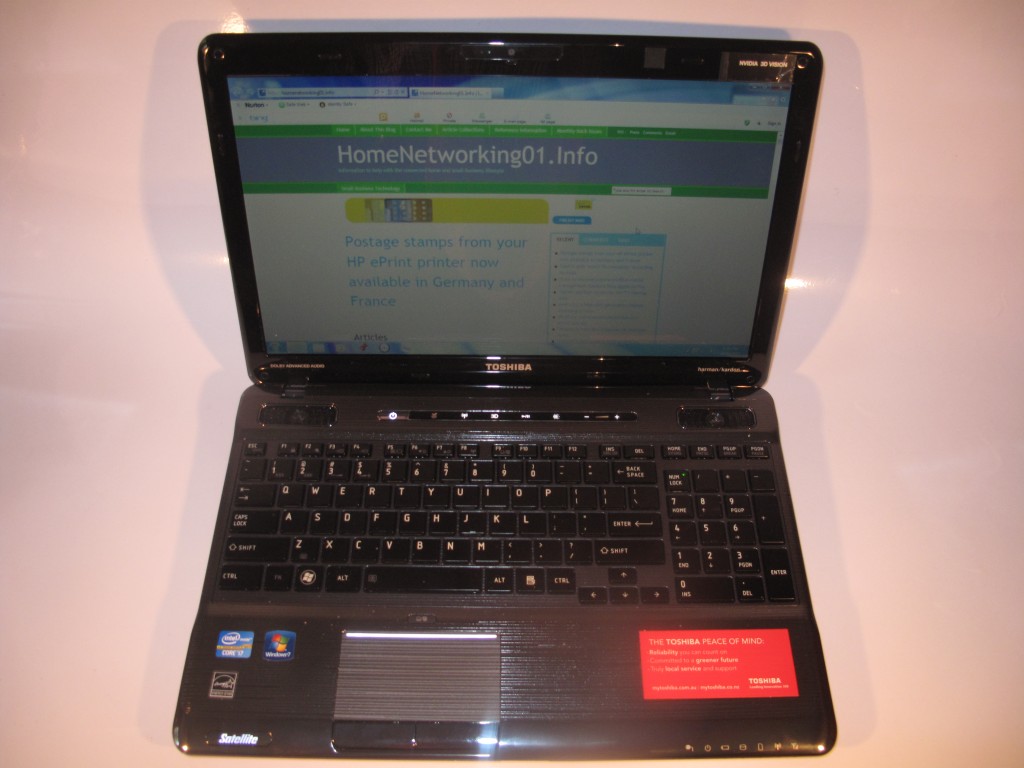 The Toshiba Satellite P750 is finished in what Toshiba describes as a “metallic urban” finish. This is a dark charcoal black finish with a finished-metal texture on a plastic case. It is the same across the lid and the palmrest.

The build quality is very good for its class I would expect a lot of time of use out of this series of machines. 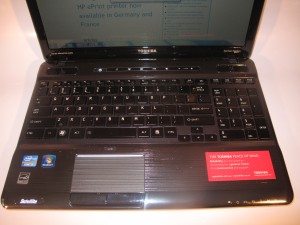 The Toshiba is equipped with an illuminated chiclet keyboard with numeric keypad. Unlike a lot of illuminated keyboards, this only lights up when you actually use the keyboard, the same practice as observed with a lot of mobile phones. Like for most recent-issue 15” and 17” laptops, there is a proper numeric keypad. The keyboard is still roomy to use and allows you to touch-type accurately for longer periods, although it feels very slippery.

It uses a trackpad is just slightly recessed and is highlighted by an illuminated bar at the top of the trackpad area. This can still be very sensitive and cause the cursor to jump around.

The Satellite P750’s keyboard and trackpad is augmented by a Supplementary touch buttons row above the keyboard. This provides control over wireless, 3D, media play-pause, sound volume and display brightness.

The Satellite P750 laptop has three USB sockets, with one being a USB 3.0 connector for hard disks and similar applications. Unlike most other laptops I have reviewed, it doesn’t have an eSATA connection but this won’t matter if the external hard disk has a USB 3.0 connector.

The Toshiba has the same “Sleep and Charge” as the previously-reviewed Portege R830 from the same stable. This is where it can use the USB 3.0 port to supply power to external devices while it is off; and can allow you to leave the mobile phone charger behind yet charge your mobile phone.

There are two 3.5mm jacks for connecting a microphone or line-level audio device; and a pair of headphones or external speakers. This Toshiba laptop can be set to become amplified speakers for a connected external audio player even if it is off through the “Sleep And Music” mode.

External displays can be connected to the Satellite P750 using the HDMI or VGA connectors, with the HDMI connector also supporting control of HDMI-CEC compliant displays and audio setups. For example, this would cause a connected Panasonic Viera plasma TV to light up with the computer’s display image when you turn this laptop on or a home-theatre receiver like the previously-reviewed Sony STR-DA5500ES to select the right input when the laptop comes on. 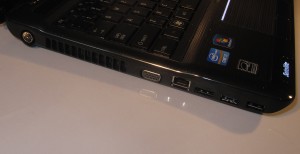 The TV antenna connection is the standard Belling-Lee (PAL) connector that is part of the machine’s connection set. This avoids the need to mess with cord adaptors in order to connect regular TV-aerial setups for the TV tuner. Of course, ATSC (USA) variants would use the screw-on F connector.

The Toshiba Satellite P750 uses a 2.1 speaker system that has been “worked” by Harman-Kardon. The main benefits that I have heard include a very “punchy” sound for all kinds of media playback.

I have tested this Toshiba’s 3D Vision capabilities on the demonstration material that is made available by NVIDIA and it is effective. The NVIDIA 3D glasses worked properly on their own battery and did provide the proper effect. They were able to be used by people who wear prescription or other glasses by just simply wearing them over those glasses. You should really have the laptop connected to AC power if you want to use 3D capabilities because this can drain the battery very fast.

There are variants in the Toshiba Satellite P750 Series which have the Optimus version of the NVIDIA GeForce GT540M. These only support 3D when connected to a 3D-capable display like the newer 3D flat-panel “main-lounge-area” TVs. But they have the the Optimus automatic dual-graphics modes that allow you to conserve battery runtime.

The screen front is very glossy which can be of nuisance value in brightly-lit rooms and can attract fingermarks.

The Satellite P750 is equipped with an integrated digital-TV tuner which would be configured for the market that this laptop is supplied in. Personally, I would prefer that the tuner is software-based so that it can be set by the user to work in any country that the laptop is taken to.

The main disadavantage of using only a discrete graphics chipset is that you lose on the battery runtime. I was able to engage in mixed tasks (typing, multimedia) for around three hours before it run down. Even running a DVD would make through two and a half hours. Use of the 3D functionality also places more demand on the battery.

It may be not of concern if you often run the machine from AC power rather than the batteries.

The Toshiba Satellite P750’s trackpad could be recessed further so it isn’t easily activated during a bout of touch-typing.

The lock slot could also be repositioned so you can use larger locking devices while the laptop is connected to external power. This may be of concern with some of the combination locks that may have their release button close to the power cable.

I would also like to see the Blu-Ray drive be a direct-insert (slot-load) type rather than the typical drawer-load which becomes a bit too ordinary, especially on a premium-tier multimedia machine.

As I have said before, the TV tuner could be software-based for round-the-world TV reception; and the software-based operation could also support newer standards like DVB-T2 which is being rolled out across Europe.

I would position the Toshiba Sattelite P750 Series laptops as multimedia work-entertainment systems for nomadic users such as those of us who sail or fly for work. The combination of the Blu-Ray player, TV tuner and self-protecting hard disk would be of benefit to university students, nurses and the like who primarily live in on-campus accommodation that has small rooms like the typical college dorm. It also has the graphics ability that would expose it to image or video creation tasks.

Of course, if you were to take the screen size and the self-protecting hard disk out of the equation, this computer would be on a par with the Dell XPS L702x that I previously reviewed.